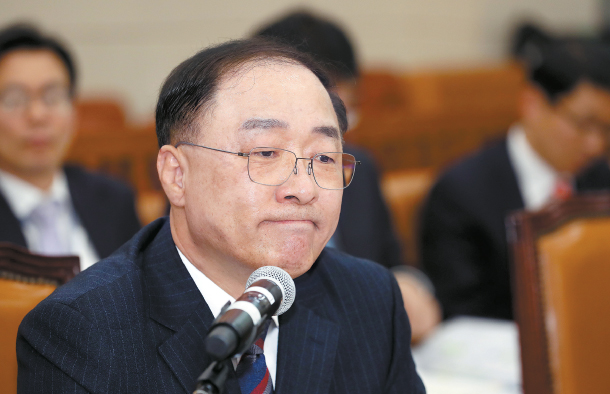 Hong Nam-ki, finance minister nominee, at a confirmation hearing at the National Assembly in Yeouido, western Seoul, on Tuesday. [YONHAP]

Finance Minister nominee Hong Nam-ki acknowledged the impact of minimum wage increases on the job market and the overall economy, adding that he advocated a change in the way the adjustments are decided.

The nominee was clear that he will continue to push the Moon Jae-in government’s income-led growth economic policies, which are often blamed for recent economic troubles, including job losses for lower-income households.

He believes that it is an essential tool in addressing the wide income gap in the country.

“Starting next year, we will consider the market acceptability of a wage rise, the ability of companies to pay employees more and the economic impact of a rise,” nominee Hong said during his confirmation hearing at the National Assembly on Tuesday.

Hong acknowledged the need for adjusting the rate of the minimum wage increases, adding that he expects the impact from the two rate increases so far will hit the market next year.

“Since the 10.9 percent hike for next year is already decided and enacted under law, the rationalizing of the minimum wage increases will come after next year,” Hong said.

The finance minister nominee said he has looked into the possibility of applying different minimum wages according to region, the size of companies, the character of the businesses and the nationality of the workers. But he said, although there is a need to apply different minimum wages, such variations are not easy to apply in the field.

“It would be the right course to have deeper research and, if needed, discuss with the National Assembly,” Hong said.

Hong acknowledged the need to adjust minimum wage rises, but he was clear he has no intention of challenging Moon’s income-led growth policy.

“The income-led growth is aiming for short-term effects,” Hong said. “The policy effects will become apparent in the second half of next year.”

He said the economy is in its current state largely because of structural problems that have been building up over the years and the delay in addressing them.

Income-led growth “is right,” Hong said. “I will be making changes and reinforce areas that failed to meet with market expectations.”

The income-led growth policy is designed to improve job quality and wages to encourage lower and middle-income households to spend more. This spending is seen contributing domestic market growth, which will contribute to sustainable growth and reduce dependency on exports.

The rapid increase in the minimum wage resulted in layoffs, particularly of those working in temporary jobs in the service industry, including convenience stores and restaurant.

In the latest report from Statistics Korea, the number of people working in the restaurant and lodging businesses dropped 970,000 in October alone, which is a 4.2 percent decline from a year ago. In wholesale and retail, 100,000 jobs were lost, or 2.6 percent of the total.

Although the October figure indicates some improvement, the number of new jobs was less than 100,000 for the fourth consecutive month.

“With the replacement of the deputy prime minister, we has some hope about our economy,” said Na Kyung-won, the opposition Liberty Korea Party lawmaker. “However, Hong’s remarks send a clear message of not giving up on income-led growth.”

Finance Minister nominee Hong said he sees some Korean economic indicators, including consumption and exports, as being stable, while investment, employment and wealth distribution, the indicators that have the biggest impact on society, struggling.

“The problem is worsening sentiment,” Hong said. “What we should be most aware of is the withering sentiment of economic participants and the loss of confidence,” Hong said.

“If I am given the opportunity, I will maximize innovation, dynamism, inclusiveness and fairness. Our goal will be to create an inclusive nation where everyone lives well,” he added.