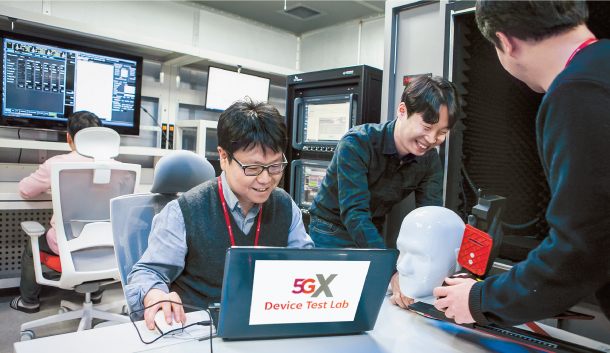 Researchers at SK Telecom’s 5G Device Test Lab test devices enabled to connect with the next-generation network at the lab in Gyeonggi on Tuesday. [SK TELECOM]

Mobile carriers are getting ready for 5G by establishing centers to test devices enabled for the technology and by developing systems for monitoring the network infrastructure.

SK Telecom opened a “5G Device Test Lab” on Tuesday in Bundang District, Gyeonggi. The 300-square-meter (3,229-square-foot) center is equipped with network equipment to test the interoperability of various devices with the next-generation network.

The 5G offering is expected to be 20 times faster than currently available 4G long-term evolution (LTE).

“As a wide range of 5G devices are expected to roll out in the market, including smartphones, as well as wearables and telematics for cars, we decided to establish test labs for telecommunications quality checks,” a spokesperson from SK Telecom said.

According to Korea’s largest mobile carrier, the lab is surrounded by shielding walls made of steel plates about 25 centimeters (9.8 inches) thick so that 5G airwaves are not disturbed by radio waves from outside. Currently, devices made by Samsung Electronics and LG Electronics are being tested at the center, according to an industry insider.

Roughly 10,000 types of tests will be undertaken at the center to make sure new devices are interoperable with 5G. Once devices are proven to work with the technology, they will be tested under real-world scenarios. The lab will check, for example, whether video calls can be made far from base stations or when the device has many applications working simultaneously.

After lab tests, the carrier will take the phones to mountainous areas and to basements, where telecommunications signals tend to be weak.

The center will be available free-of-charge to small and midsize companies and start-ups developing equipment for 5G. Testing equipment is often too costly for them.

“We expect this lab to contribute to expanding the 5G ecosystem by helping small and midsize companies and start-ups roll out new devices,” said Park Jong-kwan, head of Network Technology R&D Center of SK Telecom.

Earlier in September, KT established a similar center in southern Seoul called “KT Open Lab.” It offers 5G testing equipment, shielded rooms and lab space to small and midsize companies. The center is focused on the development of products, like games and remote controls, for a 5G environment.

LG U+ will open a center similar to SK Telecom’s early next year. The company has also developed a monitoring system for fiber-optic cables used in 5G infrastructure.