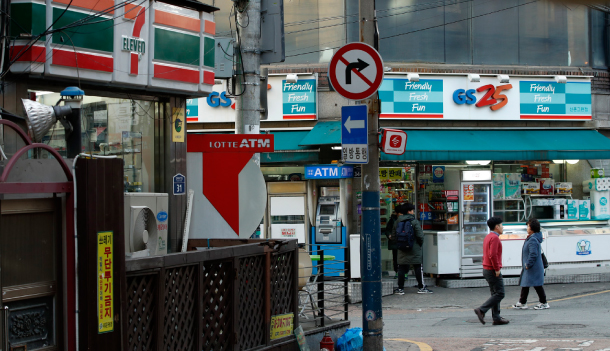 GS25 and 7-Eleven branches face each other in Sinchon, western Seoul, on Tuesday. The Fair Trade Commission announced a set of rules Tuesday that limit new convenience stores from opening near existing stores. [NEWS1]

Convenience store chains will not open stores within 50 meters (164 feet) of existing stores, the government’s solution to over-competition in the industry.

The Fair Trade Commission (FTC) announced Tuesday that it approved a set of voluntary rules agreed to by six convenience store chains and their franchisees.

An exception is Seocho District, in southern Seoul, where a limit is set by the local government at 100 meters.

Branches already in operation will not be affected.

The rules do not have legal force, but the six convenience store headquarters that agreed to the pledge will receive regular inspections and assessments from the FTC in regard to execution. They include CU, GS25, 7-Eleven, Emart24, Ministop and C.Space. Combined, they account for 96 percent of all convenience stores nationwide.

“After appearing for the first time in Korea in 1989, the number of convenience stores surpassed 40,000 last year, and this led to excessive competition to open new stores,” said FTC Chairman Kim Sang-jo during a press event in Yeouido, western Seoul, on Tuesday.

“The explosion of new stores pulled down the profitability of each franchise and produced cut-throat competition among them. Voluntary pledges were a solution suggested by people in the industry to solve this problem.”

In 2000, the FTC abolished an 80-meter limit for new convenience stores, defining it an act of collusion that went against the principle of free competition. After that, convenience store chains stuck to a voluntary policy of not opening branches within 250 meters of another one of their branches. This didn’t stop convenience stores from opening next to competitors, especially in cities.

Despite a boom in branches, not all were profitable. In 2013, several franchisees committed suicide citing financial hardship. A survey conducted that year showed that 32 percent of local convenience store branches were in the red.

The new rule will make it almost impossible to open new convenience stores in Seoul and increasingly difficult in mid-sized cities. However, franchisees are not completely satisfied.

“The distance between convenience stores at the moment is around 50 meters - a limit of the same length won’t change anything,” said Kim Ji-woon, a director at the National Convenience Association, which represents convenience store franchisees.

“We originally wanted a distance of 250 meters between stores regardless of brands, so we were pretty disappointed when we saw the final statement. But the new rules are meaningful in that it’s a first step of our opinions having been partly accepted by the FTC, and that for us means there’s the possibility for more change in the future.”

The set of rules agreed to on Tuesday included other issues formerly raised by franchisees, such as giving more autonomy to store owners on whether to work overnight instead of being forced to do so.

“We hope this method of headquarters and franchisees voluntarily coming to an agreement will expand to other franchise industries as well,” said the FTC in a statement.