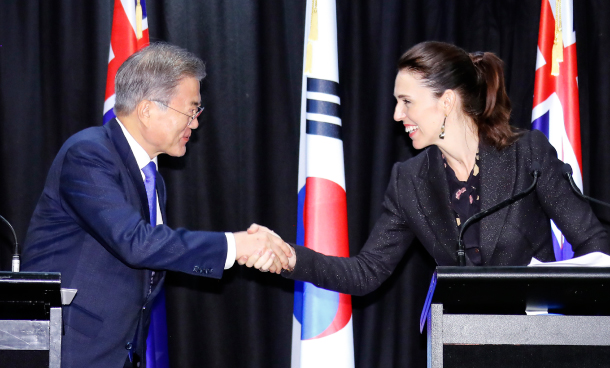 On a trip to New Zealand on Tuesday, President Moon Jae-in reiterated that a summit with North Korean leader Kim Jong-un in Seoul could still happen within the year, stressing that such a visit could help speed along the denuclearization process.

“There is a possibility that Chairman Kim’s visit to Seoul may happen within the year,” Moon said at a joint press conference with New Zealand Prime Minister Jacinda Ardern after a bilateral summit in Auckland. “However, what is more important than whether Chairman Kim’s visit to Seoul takes place within the year or not is that his visit further expedites and leads to greater progress toward North Korea’s denuclearization.”

“What is important is not to get Chairman Kim’s promise to denuclearize during his visit to Seoul,” he said, “but to mediate and convince him to enable progress toward denuclearization of a wider scope in the second North-U.S. summit to follow.”

U.S. President Donald Trump has said a second bilateral summit with Kim is in the works for as early as next month. If a Seoul trip happens this month, it will take place ahead of the Kim-Trump summit. Moon held two summits with Kim on April 27 and May 26 in the truce village of Panmunjom, which paved the way for the June 12 North-U.S. summit in Singapore. A third Moon-Kim summit took place in Pyongyang from Sept. 18 to 20.

Kim Jong-un’s visit to Seoul, if it happens, “will be the first by a North Korean leader since the division of the Korean Peninsula,” said Moon. “That in itself will be very helpful in making progress toward reconciliation between the South and North, and peace.”

Calculating the time needed to prepare for such a summit, South Korean media outlets have reported that Dec.18 to 20 were possible dates for Kim to come to Seoul. Dec. 17 marks the seventh anniversary of the death of former North Korean leader Kim Jong-il, Kim Jong-un’s father.

The Blue House has said it will make all the necessary preparations regardless of the timing.

Following a Group of 20 (G-20) summit in Buenos Aires last week, Moon made similar remarks to reporters en route to New Zealand on Sunday, leaving the possibility open for Kim to make a reciprocal visit to Seoul within the month.

This was the first time a Korean president visited New Zealand in nine years. The countries established bilateral relations in 1962 and implemented a bilateral free trade agreement (FTA) in 2015.

On Tuesday, Moon wrapped up an eight-day, three-nation trip that kicked off on Nov. 27 and also took him to the Czech Republic and Argentina for the G-20 summit. The president focused on solidifying international support for North Korea-U.S. denuclearization talks and peace on the Korean Peninsula.