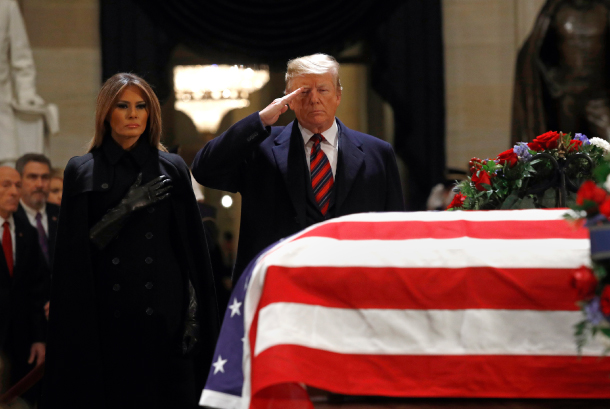 U.S. President Donald Trump Tuesday played up the role of China in getting North Korea to denuclearize following his bilateral talks with Chinese President Xi Jinping.

“President Xi and I have a very strong and personal relationship,” Trump wrote over Twitter Monday. “He and I are the only two people that can bring about massive and very positive change, on trade and far beyond, between our two great Nations. A solution for North Korea is a great thing for China and ALL!”

Trump and Xi’s bilateral summit Saturday on the sidelines of a G-20 leaders’ summit in Argentina resulted in a 90-day delay in new U.S. tariffs, possibly giving leeway for progress in diplomatic affairs.

On Sunday, Trump said aboard Air Force One that a second summit with North Korean leader Kim Jong-un is likely to take place in January or February, with three possible venues discussed thus far.

Trump said about his talks with Xi, “He is agreeing to work with me 100 percent on North Korea, and that’s a big thing, too.”

After the working dinner in Buenos Aires between Xi and Trump, the White House said in a statement that the two leaders “agreed that great progress has been made with respect to North Korea and that President Trump, together with President Xi, will strive, along with Chairman Kim Jong Un, to see a nuclear free Korean Peninsula.”

Trump had talks on the same day with South Korean President Moon Jae-in, and said a second meeting with North Korean leader Kim would happen soon, to follow up their June 12 Singapore summit, and also supported a visit by Kim to Seoul.

Trump has often linked trade issues with security and diplomatic matters, including North Korea’s denuclearization, and, at times, blamed Beijing when negotiations with Pyongyang were not advancing. Other times, Trump has both openly praised Xi for China’s role in enforcing sanctions to bring the North to the negotiation table, and also said that it “could do more.”

On Aug. 24, Trump abruptly canceled a planned trip by U.S. Secretary of State Mike Pompeo to Pyongyang blaming, in a tweet, a lack of “sufficient progress” in denuclearization, saying the trip would take place when the “trading relationship with China is resolved.”

U.S. Treasury Secretary Steven Mnuchin, who was included in the Trump-Xi summit, told reporters afterward that there was “very specific discussion on North Korea and a commitment that they will work with us to make sure that there is a nuclear-free peninsula.”

Mnuchin was also quoted as saying by the Voice of America Monday that Pompeo “has been doing a great job and came out of that meeting with a real commitment from China, and there’s many other issues we have with China that we’re going to work on.”

“There is a very strong commitment between the two presidents to work together to make sure that we have a nuclear-free Korean Peninsula,” Mnuchin said in an interview with CNBC Monday. “As you know, I’ve been actively involved in the sanctions, so this is something that is very important, and Secretary Pompeo has been doing an amazing job leading these efforts.”

The United States has maintained that sanctions relief won’t come until the complete denuclearization of North Korea, while China has pushed for a phased, stage-by-stage approach.

Xi may have agreed with Trump to play a more active role in maintaining sanctions on North Korea and for the success of a second North-Kim summit, suggesting some sort of middle ground was reached. This could indicate that China could play a more active role in the denuclearization process and, in steps toward the normalization of relations between Pyongyang and Washington, such as a declaration to end the 1950-53 Korean War, the opening of liaison offices and a peace treaty.

Wang said in a press briefing in Buenos Aires that China also hopes that the United States and North Korea “could meet each other halfway, address each other’s legitimate concerns and advance the denuclearization of the Korean Peninsula in parallel with building a mechanism for peace on the peninsula.”