Wife of Gyeonggi governor is grilled over Twitter remarks

Wife of Gyeonggi governor is grilled over Twitter remarks 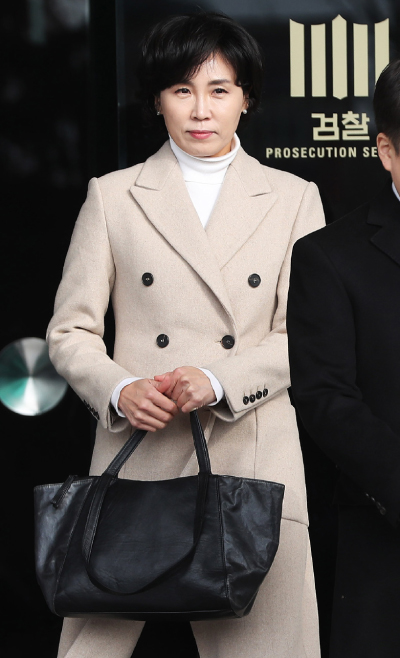 Kim Hye-kyung, wife of Gyeonggi Gov. Lee Jae-myung, emerges from an interrogation by prosecutors for a lunch break on Tuesday. [YONHAP]

Prosecutors summoned the wife of Gyeonggi Gov. Lee Jae-myung for questioning on Tuesday over allegations that she defamed her husband’s political rivals online.

Kim Hye-kyung, who police identified as the owner of the Twitter handle @08_hkkim, told reporters she was tired and frustrated at being wrongly accused as she entered the Suwon District Prosecutors’ Office in Seongnam, Gyeonggi.

“I only hope the truth is revealed,” she said, echoing the words of her husband who underwent his own 13-hour interrogation last week over a number of different criminal accusations.

Prosecutors say that Kim may be charged with spreading false information about Jeon in the run up to the Gyeonggi gubernatorial election in June and smearing the reputation of Moon’s son, Moon Joon-yong, with allegations that he obtained a public sector job through his father’s influence.

The couple also rebuffed a police request that Kim surrender her personal cellphone for a forensic analysis, saying that she had recently obtained a new cellphone and gave the old one to one of Lee’s employees after receiving hundreds of spam messages.

Lee’s critics, including a well-known lawyer who first reported the case to the police, said such claims were unreasonable given that Lee had publicly cautioned his campaign workers to be vigilant about their personal cellphones to avoid sensitive information being leaked.

Police eventually raided Lee’s office in the Gyeonggi Provincial Office and his home in Seongnam to find five cellphones Kim had used in the past according to phone company records, but couldn’t find them.

Then the well-known lawyer, Lee Jung-ryul, claimed the police already had a smoking gun in their hands in regards to Kim’s ownership of the Twitter handle.

On Nov. 21, police announced the email account linked to the Twitter handle was last used at Lee’s home in Seongnam.

Lee Jae-myung’s aide refuted that, saying that Kim’s email was public knowledge and that it may have been used by someone else to create the Twitter account.

With only ten days until the statute of limitations runs out, prosecutors appear determined to indict Kim following her interrogation. Any criminal charges are expected to deal a blow to the political future of the governor, who is potentially facing expulsion within his own party as the numerous scandals he faces pile up.

Lee’s supporters are defending the governor against what he claims is an unfair investigation by authorities. Around 50 supporters protested on Tuesday as they watched Kim solemnly step inside the Suwon District Prosecutors’ Office for questioning.