Cho A-yeon will begin her bid to be the KLPGA Tour’s next super rookie when the new season tees off tomorrow. 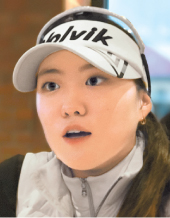 Cho could well be the next big name in Korean golf. Even during her junior career, Cho became well known for her strength, with her biggest hits rivaling those of male golfers.

“There’s probably not a single player that got yelled at by their dad more than me,” Cho said. “My mom used to cry because my dad was yelling at me too much, but when she started watching me play for a year, she started giving me lessons, too. My mom shoots about 130 and she’s telling me, a national team player, what to do.”

In addition to Cho’s strong impact, she has become a notable player in Korean golf for her accuracy with an iron. She hits further and straighter than other female golfers, making birdies look significantly easier as she puts herself within tap-in distance of the hole.

Cho makes bigger divots and, therefore, has to deal with a lot of backspin, just like male players. Due to this, many critics think that Cho might be better on the professional tour as the greens on amateur tournaments are softer. Softer greens can lead to increased backspin.

But it’s not only her iron shots. Cho carries her drive about 220 meters (241 yards), considered long for the KLPGA Tour, and hits unfailingly straight.

“I haven’t hit my drive out of bounds for years now, so I don’t really know what ‘out of bounds’ is,” Cho said.

Making her professional debut at 18, it may seem like Cho is nothing but a success story. But it wasn’t all glory and shouting fathers - Cho finished fourth at the national team qualifier this year and missed out on a spot at the Asian Games. Only the top three players compete at the Asiad.

Instead of the Asiad, Cho competed at the World Amateur Team Championship 2018 in Ireland in August. Normally, only the top players on the national team get the opportunity to compete at the tournament, but because of the Asiad, three lower-ranked players had an opportunity to tee off.

“Some broadcasting company visited the training center to cover the athletes,” Cho said. “But they excluded us and only covered athletes that were competing at the Games. I was really embarrassed and realized that’s what we get if we play badly. It was good motivation for me to work harder.”

Cho’s embarrassment quickly paid off. Although Team Korea finished third at the tournament in Ireland, Cho won the women’s individual, shooting a four-round total of 17 under par.

Although Cho’s victory was not a big deal in Korea, it is considered a bigger achievement than a gold medal at the Asian Games, as the tournament features the world’s top-ranked amateurs.

After a win in Ireland, Cho finished her season strong, winning the KLPGA Tour qualifier.

“It was the biggest turning point in my life,” Cho said.

Interestingly, Cho has often looked stronger in bigger tournaments. In the 20 professional tournaments that Cho has competed in as an amateur since 2015, she missed the cut in only two of them. Cho’s playing style suits more difficult courses.

Cho’s tournament strength has set high expectations for the upcoming KLPGA Tour season and possibly the LPGA Tour in near future.

“After winning the KLPGA Tour’s rookie of the year award, I want to compete against the best players on the LPGA Tour,” Cho said. “Until then, my confidence will be my biggest enemy.”

Cho will make her KLPGA Tour debut as a professional golfer at Hyosung Championship with SBS Golf in Vietnam tomorrow.