PARK HYUN-YOUNG
The author is a global economic news editor of the JoongAng Ilbo. 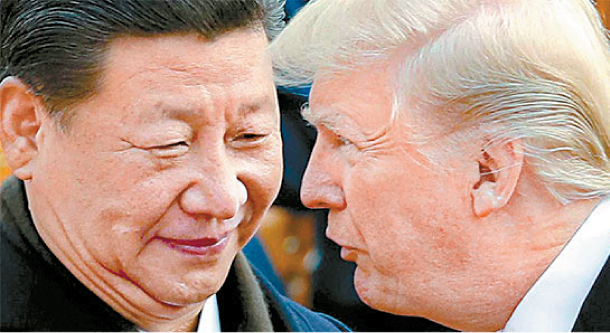 The world breathed a collective sigh of relief as the United States and China agreed not to escalate the trade war at the summit on Dec. 1. There are hopes that U.S. President Donald Trump will not expand the trade war for now. The dinner was to suit Trump’s tastes, and his favorite beefsteak was served as the main course.

Chinese President Xi Jinping offered a gift at the dinner table. He promised to buy an additional $1.2 trillion worth of U.S. products. Xi took 30 minutes to respond to over 140 items that the United States proposed. The dinner was amicable and ended with big round of applause that could be heard outside.

The sound of gunfire ceased, but war clouds remain. It is uncertain whether the 90-day delay would be a step towards ending the war or a prelude to a bigger fight.

It was Xi that needed the temporary agreement more. While waging a war against debts with Chinese companies and local governments, Xi got involved in an unexpected trade war. So he could not tighten or loosen the money flow. Because of the trade war, China’s economic growth rate started to slow down, and spending, which was considered the last driver of growth, became sluggish. So he desperately needed time to revamp the strategies.

Without the cease-fire, tariffs on $200 billion worth of Chinese exports to the United States would be up 25 percent, from 10 percent. When tariffs are expanded to all Chinese products, the Chinese economy is bound to be hurt.

President Trump has no reason to refuse a truce. He can partially deal with the accumulating inventory of agricultural and energy products, whose export to China has been blocked due to tariffs. It can be a means to appease his farming and working-class supporters. The United States doesn’t need to offer anything. Even before the trade war began, China attempted to negotiate by offering to buy more U.S. agricultural products. But President Trump refused. He didn’t want to sell more products, but wants to change China’s industrial policy fundamentally.

It can be read as a message to redefine the front and fight anew. It is Trump’s style to press until the other side surrenders. But Xi can hardly accept demands for a change of China’s national industrial policy such as Made-in-China 2025.