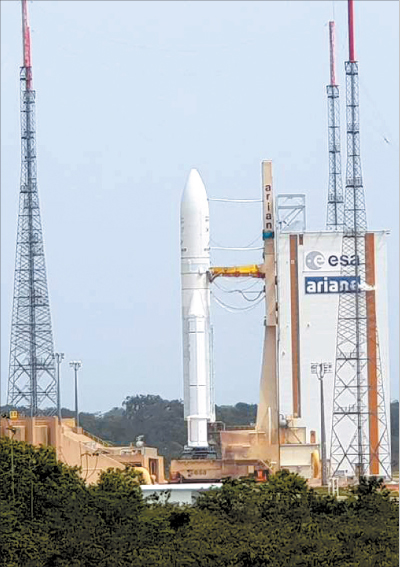 The Chollian-2A is positioned ready for launch at a space center in French Guiana. [MINISTRY OF SCIENCE AND ICT]

Korean geostationary weather satellite Chollian-2A was successfully launched from a space center in French Guiana on Wednesday at 5:37 a.m. Korean time, the Ministry of Science and ICT said.

The satellite separated from the launch vehicle made by French company Arianespace 34 minutes after launch at an altitude of roughly 2,340 kilometers (1,454 miles). About five minutes after the separation, the satellite made contact with a ground station in Dongara, Western Australia.

The 2A satellite, mostly developed by the Korea Aerospace Research Institute (KARI), will be contacting four foreign ground stations during its early operations period, to ensure stable 24-hour communications with the Earth. The Korean institute said the initial contact showed the satellite was stable.

The target geostationary orbit is 36,000 kilometers from the earth’s equator. After reaching that height, the satellite will be tested for six months before it starts monitoring the Earth’s weather conditions from July next year, the Science Ministry said.

The Chollian-2A - also known as the Geo-Kompsat-2A - is one of two follow-up satellites to the Chollian-1, Korea’s first geostationary satellite launched in June 2010. While the first satellite was used to monitor weather and ocean color, 2A will focus on monitoring space and terrestrial weather, while the Chollian-2B will check oceans and the atmospheric environment around the Korean Peninsula.

KARI said the 2A will be able to deliver color videos of weather conditions to ground centers every 10 minutes, which is three times faster than its predecessor. The spatial resolution of the video is expected to be four times better than what the original satellite offered.

“The higher definition will enable [researchers] to tell the difference between clouds and similar conditions like smoke from fires or yellow dust,” the Science Ministry said in statement. “Accuracy in forecasting the movements of a typhoon will be greatly enhanced as well.”

While the Chollian-1 delivered 16 types of weather data, the new Chollian-2A is able to record 52 types of information including sea surface temperature, snow depth, radiances, ozone and more. Collected data will be transferred to ground centers at 18 times faster speeds than before.