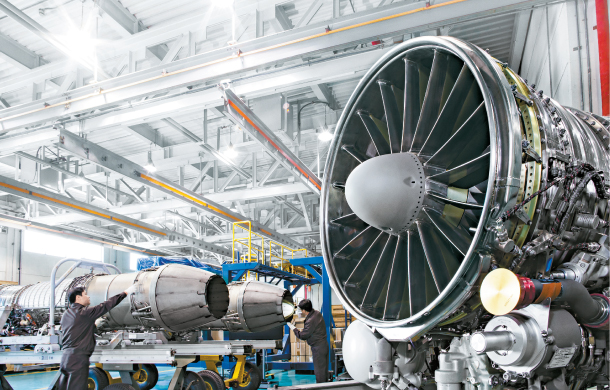 Hanwha Group has recently strengthened its aerospace business by transferring all of its scattered related businesses to Hanwha Aerospace, which changed its name from Hanwha Techwin in April to be better recognized as an aircraft engine maker.

Under the new name, the company hopes to expand its presence in the aerospace business with a special focus on aircraft engine parts, which it has been making since the late 1970s. It was one of the earliest businesses adopted by the Korean conglomerate, which started off as a defense company making explosives in 1952.

The group has set it sights back on the traditional engine business as the global aircraft engine market is expected to grow into a $54.2 billion industry by 2025, expanding at an average six percent annually, Hanwha said Wednesday. The growth is backed by an increasing number of air passengers and fleet expansion by air carriers, especially low-cost carriers.

The global aircraft engine market is dominated by three major players - Pratt & Whitney (P&W), General Electric and Rolls Royce - which accounts for up to 80 percent of the market. As a latecomer to the market, Hanwha Aerospace didn’t have a large standing until recently. It maintained its business mostly by supplying parts to bigger engine makers and had little authority on the design side, as it produced parts following designs provided by its customers.

Things started to change, though, in 2015 when it was selected as a partner for P&W’s Risk and Revenue Sharing Program. The program distributes costs and revenue incurred during the development and sales of an aircraft engine in accordance with a participating party’s share in the project. Such programs are common in the industry since it is risky and costly to develop a new aircraft engine, even for giant companies like the dominant three engine makers.

Among the roughly 150 engine part makers globally, only about the top eight companies, including Germany’s MTU, U.K.-based GKN and Italy’s Avio, have been selected to join in the risk sharing program, according to Hanwha.

“Hanwha Aerospace has further enhanced its status as a key strategic partner of P&W by joining our risk sharing partnership program,” said Dave Emmering, vice president of group strategy and development at P&W. “Hanwha Aerospace is an important part of the success of our Geared Turbofan programs.”

Geared turbo fan engines, which use a gearbox to make fans spin at optimal speeds, are fuel-efficient and quieter than the more common turbofan aircraft engines. Hanwha supplies middle turbine frames and integrally bladed rotors, which are both core parts of a geared turbo fan, for P&W. Those parts were co-developed with P&W under the risk and revenue sharing partnership.

While the Korean engine maker injected 48 billion won ($43 million) into developing geared turbo fan engines with P&W last year, about 90 billion won of additional investment is planned for this and next year. Hanwha said it will continue to make investments until 2025.

Thanks to the massive investments in engine development and the risk and revenue sharing program with P&W, Hanwha was able to secure long-term parts supply deals worth $17.1 billion with the three major global engine makers over the last four years, the company said.

“While the risk and revenue sharing program has high barriers to entry and the initial investment cost is more than several trillion won during the engine building period, it is a program we have to join to become a specialized engine manufacturer,” said Shin Hyun-woo, president of Hanwha Aerospace. “Like we have maintained roughly 30 years of partnership with P&W, we will continue to expand our aircraft engine business by cementing stronger partnerships with General Electric and Rolls Royce.”

To further bolster its standing in the aeroengine market, the company has built its second production base in Vietnam, in addition to its main facility currently in Changwon, South Gyeongsang. A ceremony to commemorate the completion of the factory will be held today.

“[The new production base] is expected to start full-scale mass production from next year,” said Yoo Dong-wan, head of Hanwha Aerospace’s engine business division. “Then, we will be able to bolster our parts’ cost competitiveness.”

In a group-wide effort to support the aerospace business, the conglomerate announced in August that it will inject 4 trillion won into enhancing the global competitiveness of its aerospace and defense businesses until 2022.