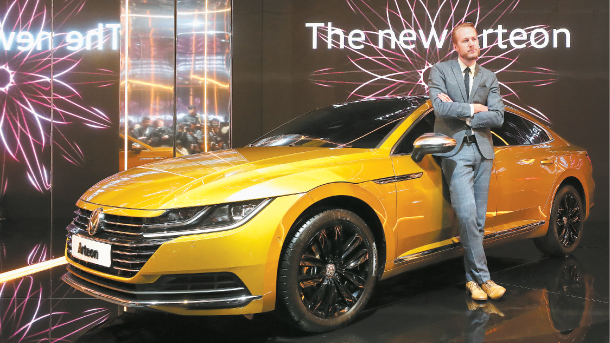 Volkswagen launched its sleek new midsize Arteon sedan in Korea on Wednesday with high hopes that the car will overshadow consumers’ memories of the company’s emissions rigging scandal, which was first revealed three years ago.

The sedan is the last of the five cars the German automaker promised to roll out in the local market in April, when it opened up a press event to show it was back in Korea after suspending sales in 2016.

Stefan Krapp, the managing director of Volkswagen Korea, said he is “convinced the new Volkswagen Arteon will be another best seller in the Korean market, alongside the Tiguan, Tiguan Allspace and Passat,” during the launch event. He introduced the new sedan as its “new flagship model that opens a new chapter of Volkswagen’s design language.”

The latest sedan is positioned at the top of the carmaker’s sedan line up, even above the Passat GT, according to Krapp.

Under its sporty-looking exterior lies a spacious interior, thanks to the Arteon’s 28.40 centimeters (11.18 inches) wheelbase, which the carmaker says is the longest among its competition. The storage space can be as large as 1,557 liters (55 cubic feet) when the backseats are folded down.

All Arteons come with a whole package of driving assistance programs, including adaptive cruise control and parking assist as basic features, in line with the digital trend sweeping the auto market. The cars come in two trims - Arteon Elegance Premium and Arteon Elegance Prestige. The most distinct feature of the Arteon is its quality assurance program.

Krapp said the carmaker’s utmost priority is regaining consumer trust and reaffirmed the company will not compromise on quality.

Volkswagen’s Triple Trust Program, exclusive to the Arteon, offers a bumper-to-bumper warranty for five years or 150,000 kilometers (93,205 miles), whichever comes earlier. The program also guarantees up to 1.5 million won ($1,347) in maintenance costs when metal plating or painting is necessary after an accident. For windshield glass, side mirrors and tires, which often need to be replaced, the company will guarantee up to 2 million won in repair cost.

“This package is the best available in the market, I would say,” Krapp said. He added that in the import car market, where consumers usually sacrifice either style or value for money, the Arteon offers both.

“This is how we will challenge our competitors,” he added.

Though Volkswagen had no sales at all last year, it has gradually been coming back to life thanks to the popularity of the four models it launched earlier this year: the Passat GT, Tiguan, Tiguan Allspace and Passat TSI. The automaker’s market share in the local market is still in the single digits, low compared to good days when its shares were in the double digits, but it managed to reach 5.65 percent market share this year through October and sell a total of 12,294 cars.

Whether the Arteon will help sales is another question, as it’s a pricey product. The more affordable Arteon Elegance Premium carries 52.2 million won price tag, while the Prestige model sells for 57.1 million won.