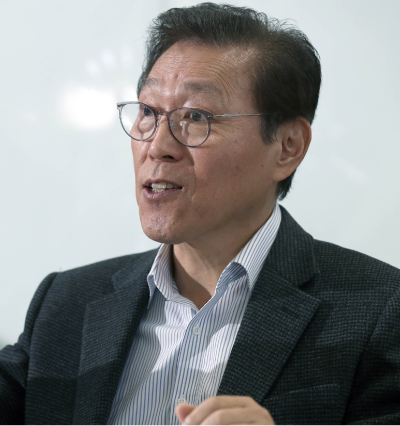 Kim Tai-yoo, 67, is a professor of industrial engineering at Seoul National University. He combines the study of economics and history to analyze the industrial revolutions that reshaped humanity.

“Korea’s preparation for the fourth industrial revolution seems to be staying at the level of China’s self-strengthening movement, which eventually failed 100 years ago,” Kim said.

In other words, it’s not a goal that should be left to the invisible hand of the free market. It’s a task the government should take charge of and actively push to implement policies and create a system for change.

Fifteen years ago, Kim was appointed as the adviser to former President Roh Moo-hyun on science, IT and technology policies. Many of his ideas were met with opposition from various government offices. Only a year later, Kim resigned. “Looking back I was really naïve. I was passionate, but I didn’t know anything about policies,” he said.

Over the following decade, Kim dedicated himself to research on economic development. Two of his works during this period, “Economic Growth” (2013) and “The Secrets of Hegemony” (2016), were both translated into English by Springer Publishing, a prestigious publisher known worldwide for academic publications.

Below is an excerpt from Kim’s interview with the JoongAng Ilbo on Nov. 26. Kim spoke about the fourth industrial revolution and how it could come about in Korea.

Q. The term fourth industrial revolution was used for the first time in 2016 during a speech by the World Economic Forum Chairman Klaus Schwab. Was it since then that you started using the word as well?

Then how would you define the industrial revolutions?

You seem to highlight a different aspect in the fourth industrial revolution compared to other experts in the IT technology field. Why is this so?

I think it’s because they often don’t have profound knowledge of past industrial revolutions. Of course, this doesn’t mean they’re wrong. What I want to say is that each specific technology, whether it’s artificial intelligence, big data and the Internet of Things, won’t evoke the fourth industrial revolution. They have to be connected. To bring about this change, policy support is necessary.

Is that linked to your claim that industrial revolutions don’t come naturally, but have to be pushed?

Yes. China was exposed to Western culture before Japan. But China only accepted the technology while Japan opened up to both technology and policies. That was the difference between the failure of China’s self-strengthening movement and Japan’s successful Meiji Restoration.

Do you mean the Meiji Restoration turned out to be a success thanks to innovations in policy?

Of course. After a painful defeat in the Opium Wars, China concluded that their loss to Western forces was due to their lack of good weapons and technology. The drive to adopt new technology was what sparked the self-strengthening movement. They sent students to study abroad and even built factories using Western methods. But it failed because China wanted to pull in technology while retaining its main “software.” Likewise, if Korea approaches the fourth industrial revolution with a narrow focus on technology, it’s likely that we will never see the fruits. The efforts made from technology experts and my voice on reforming policy should go hand in hand to bring success.

What kind of innovation do we need in detail?

We once fell behind in industrialization and went through an extremely difficult period as a colony. But now we’re facing two lucky occasions that should not be missed. The fourth industrial revolution is the first and the opening of the North Pole sea route is the second. Historically, industrial revolutions came with the discovery of a new sea route. Climate change will eventually melt down glaciers in the North Pole, and the route that opens as a result will play a crucial role in the fourth industrial revolution. It’s an incredible luck that this route is connected to the Korea Strait. We shouldn’t miss out on this opportunity, and what we need for that is innovation in the government, society and international relations.

Can you elaborate on innovation in the government?

Will it be possible to change public officials?

It’s possible if they’re not tied to a division, but a particular task. For example, if a public servant is an energy expert, make this person in charge of any kind of task related to energy in any ministry, whether it’s industry or environment. This way, we can elevate real, professional experts.

It doesn’t sound like something that can be achieved in one or two years.
It will take six months for full preparation. If it goes into effect within a year, the effects will start to be evident within three years.

What do you find troublesome about the general perception of the fourth industrial revolution?

A big misunderstanding is the belief that the fourth industrial revolution will come naturally as long as everybody does their best in their respective positions.