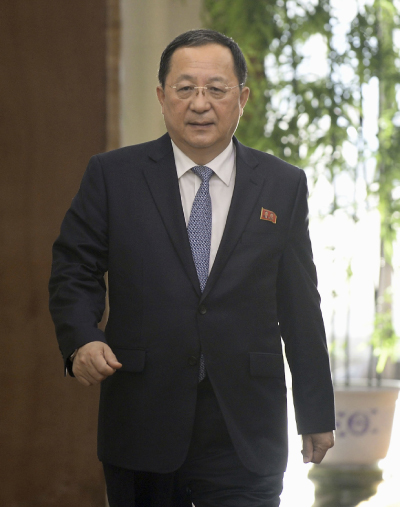 North Korean Foreign Minister Ri Yong-ho, following a four-day visit to Vietnam last week, made a trip to Syria and next heads to China, where he will hold talks with Chinese Foreign Minister Wang Yi.

China’s Foreign Ministry announced Tuesday that Ri will visit Beijing from Thursday to Saturday and meet with China’s leadership and hold “in-depth” talks on areas of mutual interest with Foreign Minister Wang, also a state councilor.

Geng Shuang, spokesman for the Chinese Ministry, said in a briefing, “We believe that Foreign Minister Ri Yong-ho’s visit will play a positive role in further implementing the consensus reached by the two top leaders, promoting the growth of China-DPRK ties and enhancing the communication and cooperation on the Korean Peninsula issue and other issues.”

The DPRK is an acronym for North Korea’s official name, the Democratic People’s Republic of Korea. Geng avoided answering a reporter’s question on whether the two top envoys will discuss a possible visit by Chinese President Xi Jinping to Pyongyang, only saying he has “no information to offer” at this point.

Ri’s visit to Beijing comes on the heels of U.S. President Donald Trump’s bilateral meeting with Chinese President Xi Jinping on Saturday on the sidelines of a Group of 20 leaders’ summit in Argentina, which resulted in a temporary halt in escalation of the U.S.-China trade war.

Aboard Air Force One on Sunday, Trump said that Xi agreed to “work with me 100 percent on North Korea.” On Monday, Trump tweeted about Xi, “He and I are the only two people that can bring about massive and very positive change, on trade and far beyond,” adding, “A solution for North Korea is a great thing for China and ALL!”

A Beijing diplomatic source said on Tuesday, “Foreign Minister Ri stopping by Beijing on his way home seems to be intended to confirm the results of the U.S.-China leaders’ summit. It could also be a return trip for Foreign Minister Wang Yi’s visit to Pyongyang back in May.”

Trump also said on Air Force One, heading home from Buenos Aires, “We have actually talked about three sites” for a second summit with North Korean leader Kim Jong-un, which he said could happen in January or February. When asked if the sites were Asian countries, Trump said the location would be “within plane distance,” but did not elaborate.

Kim’s private jet, the Chammae-1, is an antiquated Soviet-era Ilyushin IL-62M aircraft. This jet safely flew the 4,700 kilometers (2,920 miles) from Pyongyang to Singapore for the June summit. But Kim himself ended up flying to Singapore on an Air China Boeing 747-4J6 plane that usually carries high-level Chinese officials.

However, Malaysia is where Kim Jong-nam, the estranged half-brother of Kim Jong-un, was assassinated by VX, a nerve agent on Feb. 13 last year. Indonesia has faced a series of earthquakes this month. Vietnam thus seems like a logical choice.

North Korea’s official Rodong Sinmun reported on Tuesday that the two sides had “an in-depth exchange of views and reached a consensus on the issue of further developing the relations of friendship and cooperation between the two countries, provided and boosted by [late North Korean leader and founder] Kim Il Sung together with President Ho Chi Minh, in various fields as required by the new era and other issues of mutual concern.”

The North Koreans were said to have laid a wreath before the grave of the late Vietnamese revolutionary leader Ho Chi Minh and toured the Academy of Agricultural Sciences and Halong Bay. U.S. Secretary of State Mike Pompeo, during a visit to Hanoi in early July, after the first North-U.S. summit, offered to North Korea a Vietnamese model of normalizing bilateral relations with the United States and pursuing economic prosperity.

Highlighting Vietnam’s economic growth and Washington’s close ties with its previous enemy, Pompeo said in a message to North Korea, “Your country can replicate this path… It can be your miracle in North Korea as well.”

Observers pointed out that Ri could be visiting Beijing to discuss Vietnam as a location for the next North-U.S. summit.

Ri was reported by Syrian media to have said that North Korean and Syria face the same “enemy.” Assad was said to have identified the United States as a hostile country to Syria and North Korea, reported the state-run Syrian Arab News Agency (SANA).