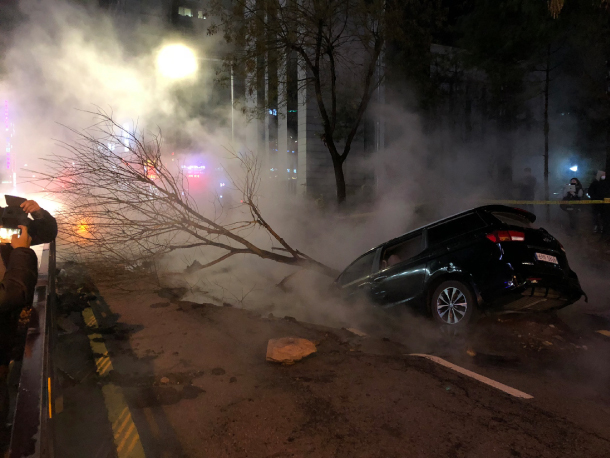 A car lies crashed into a road, subsumed by the bursting of a hot water pipe in Goyang, Gyeonggi, on Tuesday evening. The passenger, a 68-year-old man surnamed Song, was found dead after boiling water filled his vehicle. [KIM SEONG-RYONG]

An underground pipe carrying hot water to local neighborhoods in Goyang, Gyeonggi, burst on Tuesday evening, killing one man and scalding over a dozen people.

Boiling water of around 80 degrees Celsius (176 degrees Fahrenheit) erupted like a geyser from the pipe at around 8:43 p.m., gushing as high as the 10th floor of a building, according to local residents who witnessed the incident.

With steam blanketing the area like smoke from a fire, the street was inundated with hot water, inflicting severe burns on pedestrians. Parts of the street even collapsed.

One 68-year-old man, identified by his surname Song, died in his car after suffering burns from boiling water that flooded his vehicle, according to firefighters. Emergency responders said that burns covered his entire body when he was removed from the car.

Pandemonium ensued on the street for at least an hour as people screamed in pain as their feet were scalded. Many had to be carried to safety by other pedestrians. At least 23 people were admitted to the hospital that evening.

When the hot water was shut off by its operator - the Korea District Heating Corporation’s Goyang branch - at around 9:55 p.m., a total of 2,861 households in the area were left devoid of hot water as the temperature dropped to its lowest point this winter in Seoul, minus 6.6 degrees Celsius, on Wednesday morning.

The exact cause of the pipe’s bursting is not yet known, though one source from the Goyang city government who visited the accident site on Wednesday morning attested that the pipe was rusted. “It likely burst because it could no longer withstand the pressure from all that water passing through,” he said.

The Korea District Heating Corporation provides a system where heat is distributed to residential and commercial buildings through a system of insulated pipes.

The pipe in Goyang, which was installed over three decades ago in 1991, is at the heart of the district heating system in northwestern Gyeonggi, providing heat to over a million people.

Repair operations on the pipe began immediately after the situation was contained at around 10 p.m. and heat supply resumed by 7:55 a.m. on Wednesday morning.

Sympathy for the victim of the boiling flood spread across the internet on Wednesday after reports surfaced that Song had been returning from a congratulatory dinner with his youngest daughter and her husband-to-be at a nearby restaurant. Apparently the street underneath his SUV collapsed, leading to the flooding of his vehicle.

The car was heavily damaged after it crashed in the collapsed street. Song was discovered dead by paramedics in the back seat of his car, though the water had drained out by that point.

“I was going to get married in April, and my father always told me that all he cared about was my happiness,” Song’s daughter told reporters on Wednesday. “I can’t believe he’s gone, since I remember him laughing only hours ago.”