President of KAIST is accused of embezzling

President of KAIST is accused of embezzling 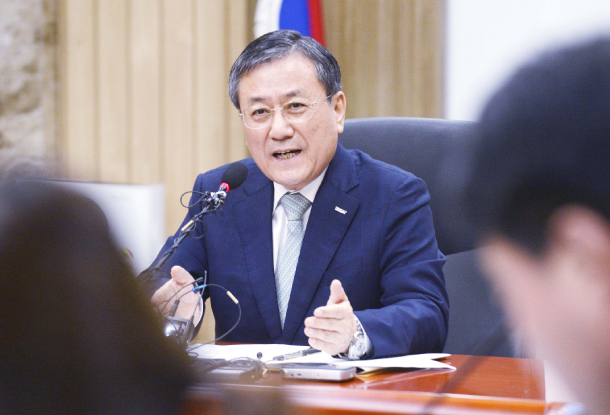 The president of KAIST, Korea’s top science and engineering university, is the target of a government inquiry that some suspect to be politically motivated.

The Science Ministry on Tuesday issued a request to KAIST’s board of trustees that it suspend Shin Sung-chul, KAIST’s incumbent president, six days after it formally recommended he be criminally charged for embezzlement and breach of duty.

The board will decide whether to suspend Shin after an internal meeting next Thursday.

“I cannot help but feel devastated that such accusations are being brought up now,” Shin said at a press conference at KAIST on Tuesday. “We already received a detailed government audit at DGIST [his former workplace where the irregularities are supposed to have occurred] back in 2016.”

But analysts are claiming political motives are behind the investigation.

Shin’s alleged misconduct dates to his days as the founding president of the Daegu Gyeongbuk Institute of Science & Technology (DGIST), a lesser known public science and engineering institute located in Daegu.

DGIST signed a memorandum of understanding with an American research institute in February 2012. The Lawrence Berkeley National Laboratory (LBNL) - better known as Berkeley Lab - agreed to provide DGIST with cutting edge research equipment from its Center for X-ray Optics in exchange for research fees from DGIST.

Six years later, a government audit concluded that DGIST had paid Berkeley Lab twice as much as it needed to.

“According to the MOU contract, DGIST was allowed to use Berkeley Lab’s research equipment for free yet it paid the Berkeley Lab public money granted to it by a local government and public research foundations,” said Park No-jae, an auditor at the Ministry of Science and ICT.

Shin has also been accused of pulling strings to hire one of his former students who formerly worked as a researcher at Berkeley Lab.

“There is no agreement in the contract that states Berkeley Lab would provide use rights for its equipment for free,” Shin said on Tuesday. “The payment made to them was meant to get exclusive use rights for up to half of the equipment, based on requests from researchers at home.” He added that the money paid to Berkeley Lab was not from public grants, but from DGIST’s own funds.

With regards to the appointment of his former student, surnamed Lim, as a professor at DGIST, Shin denied that he exerted influence in the hiring, and that it was decided naturally as a result of Lim’s experience both at DGIST and Berkeley Lab. According to Shin, Lim proved himself through his research and his role was critical in the cooperation between the two institutes.

Analysts, and even a KAIST professor, cast doubts on the true motives behind the government’s pursuit of Shin.

“Even if the government’s accusations are true, it is unclear how Shin can be accused of embezzlement when he himself did not take the money,” said Lee Byung-tae, a professor at KAIST’s Graduate School of Management. “Science Minister You Young-min himself said the issue was out of his hands, but this recent move looks like it has the Blue House behind it.”

Lee added that Shin’s decision to appoint Lim as a professor was completely within the realm of his discretion as university president. If wrongdoing is indeed clear, the board of trustees at KAIST can easily decide on their own to fire Shin, Lee said.

Shin has refused to step down from his position, saying he would make that decision once the board meets and reaches a conclusion.

An elementary school colleague of former President Park Geun-hye, Shin became KAIST’s president last February amid a controversial selection process in which he was accused of being a political appointment. Shin has not complained of political persecution.