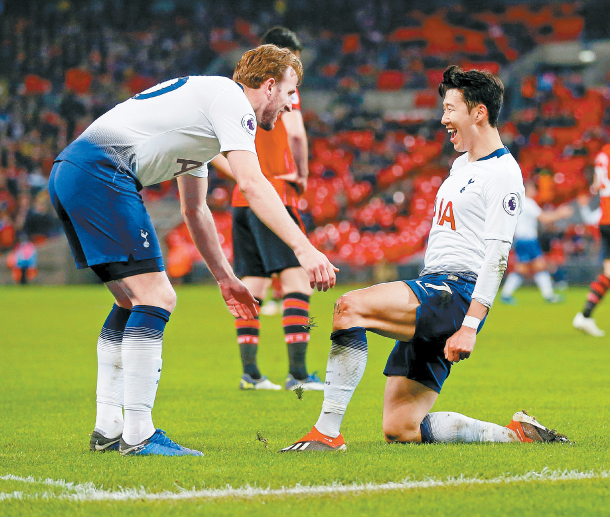 Son Heung-min, right, celebrates after scoring Tottenham Hotspur’s third goal of the match against Southampton at Wembley Stadium in London on Wednesday. [AFP/YONHAP]

Son Heung-min of Tottenham Hotspur scored his 100th European league goal during a match against Southampton at Wembley Stadium in London on Wednesday.

While Spurs were up 2-0, Son, who started on the left wing, received a pass from Harry Kane in the 55th minute and headed straight to the net to give Spurs a 3-0 lead. This is Son’s second EPL goal and his fourth, including Cup matches, for Spurs this season.

Southampton avoided a shutout loss as Charlie Austin scored in injury time. After the match, Son was given a score of 7.7 by whoscored.com, a football statistics website.

With the win, Spurs is now third in the Premier League (EPL), with 11 wins and four losses for a total of 33 points.

By scoring his 100th goal in Europe, Son became the second Korean football player ever to reach the milestone, after Cha Bum-kun. Cha started his Bundesliga career in 1989, when he was transferred to SV Darmstadt 98. After only making one appearance, Cha joined Eintracht Frankfurt, where he went on to score 58 goals. He added an additional 63 goals to his scorecard at Bayer Leverkusen, taking his total number of goals scored in 11 seasons in the Bundesliga to 121.

Son hit the 100-goal milestone eight years after he started his career in Europe.

Son made his professional debut with Hamburger SV in the German Bundesliga and scored his first goal in 2010. He stayed in the Bundesliga for six seasons, scoring 49 goals.

Son left Germany to join Spurs in 2015. Although he only scored eight goals in his first year, the 2016-17 season was when Son’s boots really caught fire.

In the 2017-18 season, Son scored 18 goals. Although it wasn’t as impressive compared to the previous year, he once again made headlines internationally - this time for his busy schedule balancing his club and national team commitments.

After finishing the 2017-18 Premier League season with Spurs, Son joined the Korean national team in May to prepare for the 2018 FIFA World Cup in Russia. After playing friendly matches against Honduras and Bosnia and Herzegovina, Son departed for Austria. There, he played in two more friendly matches, against Bolivia and Senegal, before playing in three group-stage matches - against Sweden, Mexico and Germany - at the World Cup.

After the World Cup, Son had a short break before heading to the United States to play for Spurs at the International Champions Cup, a preseason tournament. He then headed to Indonesia to compete with the U-23 Korean football team at the Asian Games, playing in six of seven matches.

But that wasn’t the end. Once he returned to Korea with a gold medal from the Asian Games, Son had just one day of rest before he joined the senior national team led by new head coach Paulo Bento.

From the friendly match against Honduras in May to the two October friendlies, Son played in 21 matches. In addition to the number of matches, the total distance Son has traveled is impressive. He has flown a total of 76,597 kilometers (47,595 miles) since May.

Due to Son’s long absence from Spurs, the KFA agreed not to call him up until the 2019 Asian Football Confederation Asian Cup, which will be held in the United Arab Emirates in January.

Although Son missed some of the season, he wasted no time in getting back into lineup. On Nov. 24, Son scored his first EPL goal of the season during a match against Chelsea. Then, less than two weeks later on Wednesday, he scored another.

Spurs will continue their season against Leicester City on Saturday at the King Power Stadium in Leicester.