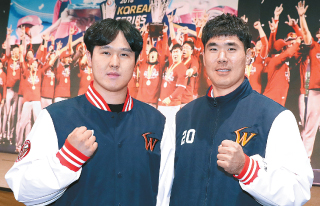 At the end of the 2014 season, Choi agreed to a four-year contract with the club at 8.6 billion won.

Choi became the second-ever free agent in the KBO to sign a six-year contract instead of the standard four years.

“The players that I’ve played with over the past 13 years are like my family,” Choi said. “Incheon SK Happy Dream Park feels like my home. I’m thankful to the fans and the club for allowing me to continue my career here.”

“Choi Jeong is a must-have player for the team and the fans,” said Wyverns manager Yeom Kyung-yup. “His stay will be good for our team’s defense and offense. As a veteran player, I expect him to lead the team and the younger players.”

Later in the day, the club signed a four-year contract with Lee at 6.9 billion won. An Incheon native, Lee is another fan favorite. This season, Lee, a catcher, ended on a high note by successfully leading the Wyverns to the Korean Series victory.

“I’m happy to continue playing for SK, the team I have played with for over 13 years, and to play in front of my home fans,” Lee said. “I’m thankful to the fans and to the club for recognizing my value. I’ll try my best to help SK win both the regular season and the Korean Series next year.”

“I’m glad to start preparing for our season without any losses in our team,” Yeom said. “Not just on the field, but Lee Jae-won also played a significant role as captain last season. I expect him to brighten up the team.”

Lee’s signing is likely to affect Yang Eui-ji’s contract as they are the only two catchers in the free agent market this year.

While the reigning Korean Series Champion successfully retained their all-time favorite players, they didn’t see much success in retaining their foreign players and manager. Former manager Trey Hillman and pitcher Merrill Kelly announced their next career moves this week, with both returned to the MLB.

Although the Wyverns hoped to keep Kelly for another season, reports claim that he has signed a two-year deal with the Arizona Diamondbacks at $5.5 million.

Shortly after, it was reported that Hillman joined the Miami Marlins’ coaching staff. Before the Korean Series started, Hillman announced that he will not return to the team next season due to family reasons.