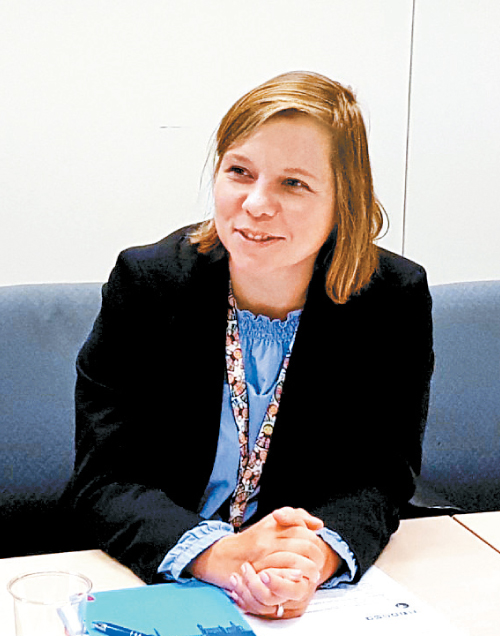 Agata Dziarnowska, policy officer of the sports unit at the European Commission. [THE EU DELEGATION TO KOREA]

BRUSSELS, Belgium - Agata Dziarnowska, policy officer of the sports unit at the European Commission, was keen to congratulate Korea on the united South and North Korean women’s ice hockey team that formed for the 2018 Winter Olympics.

“That is a perfect example of sports diplomacy,” Dziarnowska said in a group discussion session with Korean reporters in November at the EU headquarters in Brussels. “That is why sports diplomacy is so important.”

South and North Korea fielded a unified women’s ice hockey team at the PyeongChang Winter Olympics, the first-ever inter-Korean squad in Olympic history. The team may not have fared well - they lost every game - but the symbolic gesture sent a hopeful message to millions of spectators around the world.

It hasn’t been long since the European Union started paying attention to sports diplomacy, according to Dziarnowska, as the EU’s foundation derives more from economic and political initiatives.

It was only after 2015 that the EU started rolling out official activities related to sports based on Article 165 of the Lisbon Treaty which says “the union shall contribute to the promotion of European sporting issues.” The Lisbon Treaty acts as the constitutional basis for the EU.

“There was conviction that sports should be better promoted in the EU’s external relations,” the officer said. “Sports can be an import tool to promote [the] democratic values the EU wants to spread and can contribute to improve international relations.”

The EU’s flagship sport program, Erasmus+, sees athletes from member states train in different countries for a set period of time. The program is not only dedicated to sports but also includes exchanges of students in different fields. While the Erasmus+ system has been allocated 16.5 billion euros ($18.7 billion) between 2014 and 2020, the sport unit accounts for just 265 million euros of that figure.

The Erasmus+ program started among 28 EU member states at first, but now runs in select non-EU countries as well such as Iceland, Norway and Turkey.

The EU also runs what’s called the European Week of Sport, which promotes diverse physical activities for the well-being of EU citizens and more. It takes place every year from Sept. 23 to 30.

According to Dziarnowska, more than 12 million people participated in over 48,000 events of the program in the 2018 edition.