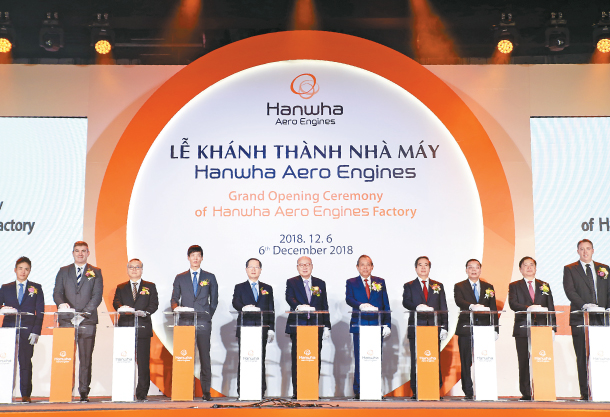 Data on production capacity was not revealed Thursday, citing business confidentiality. Hanwha said that it is the first massive aircraft engine parts manufacturing facility in Vietnam.

Hanwha Aerospace is expecting the new facility to help cut manufacturing costs due to economies of scale. It currently has a domestic facility running in Changwon, South Gyeongsang.

Full-scale manufacturing at the new factory will begin next year.

Kim said the Vietnamese factory will “play a key role in making Hanwha Group a competitive aircraft engine parts maker in the world” during his welcoming address at the ceremony. He further added that he hopes the factory will be a good mediator in strengthening ties between Hanwha and the country.

Kim’s visit comes as Hanwha has recently set its focus on its aerospace business after changing the company’s name from Hanwha Techwin in April to more bluntly show that the company makes aircraft engines. The affiliate is due to acquire aerospace businesses currently under Hanwha Corporation as well.

About 300 officials participated in the ceremony including Kim and Vietnam’s Deputy Prime Minister Truong Hoa Binh.