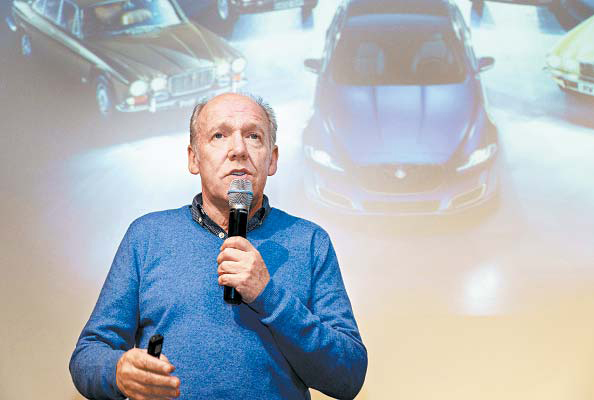 As the auto industry is headed for a paradigm shift towards electric and self-driving cars, there will be inevitable changes to auto parts and design.

British luxury carmaker Jaguar, however, will put off any drastic changes - especially to the core of its traditional design - for as long as possible.

“The design philosophy for us in the way that we view Jaguar cars will not change,” said Ian Callum, Jaguar’s director of design, at a press event on Wednesday at the Grand Hyatt Hotel in central Seoul. “But what will change is the overall shape of the car.”

Referring to the luxury brand’s first electric model released earlier this year, the I-Pace, the chief designer discussed future Jaguar designs free from the constraints of the internal combustion engine, but adhering to Jaguar’s design tradition.

“As you can see with the I-Pace, we had the luxury of recreating the silhouette of something you cannot do with an internal combustion car,” explained the designer. “It gives you the freedom to create something of a different shape.”

The I-Pace, with its electric motors integrated in the front and rear axles, features aerodynamic lines and a cab-forward design, but keeps the Jaguar grille, usually abandoned in electric cars.

Accompanied by fellow Jaguar designer Vera Park, the chief designer also said that advancements in autonomous driving will lead to changes in the interior, but made it clear that Jaguar will keep its focus on driving.

“I think it will be a long time [before] you’ll see an autonomous car from Jaguar without a steering wheel, although it may be inevitable,” said the chief designer. “But for the time being, we’re focusing on the various levels of autonomy, which include driver interaction if they choose to do so because Jaguar is fundamentally about driving.”

On whether the luxury carmaker will ever create designs for specific markets, the designer was adamant that it will maintain a unified design for all markets.

The Scottish designer has been part of Jaguar since 1999, overseeing design changes at the brand such as the current generation of the XJ sedan, Jaguar’s first sport utility vehicle, the F-Pace, and its first all-electric car, the I-Pace.

Visiting the country for Jaguar Korea’s design competition for university students, the veteran designer will judge submitted designs for the future 2068 model of the XJ sedan, which celebrates its 50th anniversary this year.