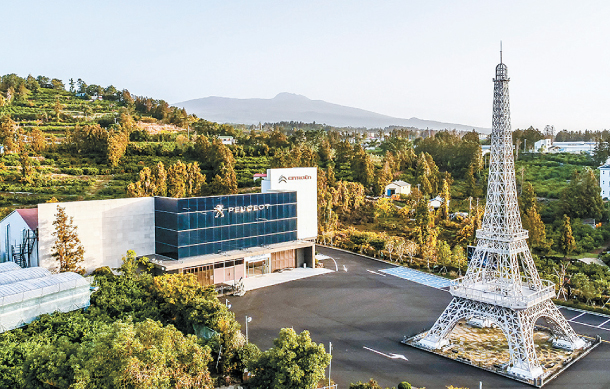 JEJU ISLAND - Hanbul Motors, a Korean importer and distributor of Peugeot and Citroen vehicles, opened an auto museum on Jeju Island on Thursday, the country’s first. It aims to take advantage of the rising popularity of the island with both tourists and long-term residence.

“The museum not only shows Peugeot’s 200 years of history but also the heritage of Citroen, which welcomes its 100th anniversary next year,” said Song Seung-cheol, president of Hanbul Motors at a press event at the museum on Wednesday.

The 8,260-square-meter (2-acre) site includes a two-story museum and a 33-meter (108-foot) Eiffel Tower statue in front of the building. A total of 11 billion won ($9.8 million) has been invested in the site over the past two years. Peugeot and Citroen are part of France’s Groupe PSA. The museum is the company’s first outside its home country.

Delay said Peugeot recorded 37 percent growth this year in Korea. He added that 23 percent of the group’s India & Pacific sales were in Korea.

The two-story building, located at Seogwipo on Jeju Island, houses some 20 models from Peugeot, including seven classic models. A Type 139 A Torpedo, which was made in 1911 as personal transportation transitioned from carriage to automobiles, is one of the classic cars in the lineup at the museum.

Hanbul Motors said it would bring in 14 more classic models next year.

The first floor includes separate showrooms for Peugeot and Citroen, where current models are on display. The Citroen Origins room, also located on the first floor, delivers 100 years of Citroen history through media presentations. Visitors can experience the interior of many Citroen models with 360-degree views, as well as hear sounds of engines and klaxons.

Hanbul Motors is banking on its rental business on Jeju Island achieving synergies with the museum. The company is the first auto importer directly engaged in car rental on Jeju Island.

According to the importer, customers utilized its rental service 12,000 times since it started in 2015.

The entrance fee for the museum is 6,000 won for adults, 4,000 won for students and 2,000 won for children. The museum provides discounts for Peugeot and Citroen owners, those who used the brand’s rental car service, group visitors and those who live on Jeju Island.

“Hanbul Motors will run programs like special exhibitions and classic car test-drive sessions to make a space where visitors can truly enjoy auto-related culture,” the company said in a statement.