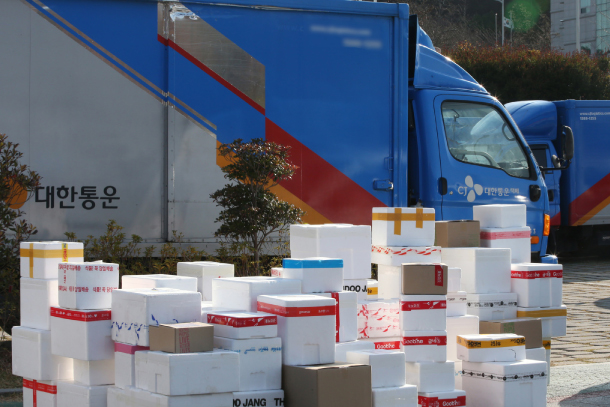 Parcels stack up in Gwangju on Nov. 23 as deliveries by CJ Logistics experienced serious delays due to a general strike by couriers that lasted from Nov. 21 to 29. [YONHAP]

The war over dangerous working conditions goes on between CJ Logistics and the subcontractors who do its deliveries.

Most of the subcontracted couriers returned to work after a strike at the end of November. But deliveries are still being delayed in many parts of Korea, particularly Ulsan, Gwangju and Yeoju, Gyeonggi.

The death of a subcontracted courier for CJ Logistics, Korea’s largest delivery company, was the spark that started a strike by 700 CJ Logistics couriers from Nov. 21 to 29.

On Oct. 29, a subcontracted worker was fatally struck by a truck at the CJ Logistics center in Daejeon. CJ Logistics says it has invested some 30 billion won ($26.8 million) into improving the safety of its working environments in its many centers.

But the Taekbae Union, a union of couriers mostly working for CJ Logistics that is affiliated with the Korean Confederation of Trade Unions, called a strike demanding the company negotiate directly with it to prevent both accidents and unfair labor practices. CJ Logistics does not recognize the Taekbae Union and refuses to deal with it.

“The couriers in the Taekbae Union are self-employed workers who have signed contracts with local CJ Logistics branches and not the company,” said a CJ Logistics spokesman. “If they want to negotiate, they should do it with the branches themselves.

“The 930 or so couriers that our company directly hires have a separate union that’s part of the Federation of Korean Trade Unions,” the spokesman added.

In Korea, branches of delivery companies like CJ Logistics are operated separately from the headquarters, with branch owners acting as independent business owners. Couriers sign contracts with these branches and are assigned regions where they are in charge of collecting and delivering parcels. Throughout the delivery process, CJ Logistics and its employees are only responsible for the “sub” and “hub” terminals, or the centers of the delivery network where parcels are gathered before being distributed to the branch offices.

The Ministry of Employment and Labor (MOEL) has been cautious in supporting Taekbae Union’s right to negotiate directly with CJ Logistics.

“It would be appropriate for the Taekbae Union couriers to negotiate directly with CJ Logistics if the union had members who are directly hired by the company,” said a MOEL public officer in charge of legal affairs for labor relations. “But if the union does not have any CJ Logistics employees, the union members should negotiate with the branch offices instead.”

One of the key issues that CJ Logistics couriers have raised is compensation for parcel sorting. Their argument is that sorting through parcels is not part of their job, and that they should be either rewarded by CJ Logistics headquarters or the branch offices for that additional work.

“We are not compensated for sorting parcels, though that takes hours every day, which leaves us working overtime,” said a spokesperson from the Taekbae Union.

Branch offices appear to have no intention of increasing compensation, however, arguing that their couriers are earning enough.

“Couriers take home more money than I am now,” said one CJ Logistics branch owner. “There’s no more money I can give. The compensation for sorting through parcels is included in their pay.”

The domestic courier services market has been growing by around 7 to 9 percent since the early 2000s on the back of online retail and TV home shopping. The market is now worth 5.2 trillion won, with some 50,000 couriers delivering 2.3 billion parcels every year.