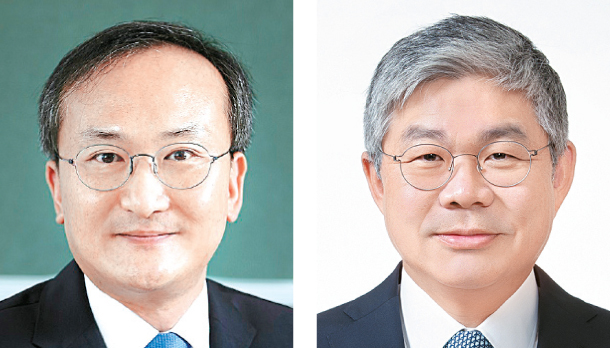 SK Group refrained from making dramatic changes at the top in its annual reshuffle Thursday, but it did replace the leader of cash-cow affiliate SK Hynix.

Maintaining stability is in line with reshuffles at other conglomerates, like LG Group, seeking continuity in a fast-changing market environment.

The group said it kept overall promotion numbers at about the same level as last year, despite record earnings reported by its affiliates. It did so mainly due to projections of slower economic growth and market uncertainties next year.

Four new CEOs were named at its big-name affiliates in the reshuffle. The changes are relatively small in number compared to two years ago, around when eight CEOs were shifted. The group is nevertheless maintaining its clear shift towards younger leaders.

SK Hynix named Lee Seok-hee, currently the company’s chief operating officer, as its new head. The 53-year-old Lee is replacing CEO Park Sung-wook, 60, who has been heading the chipmaker since 2013. Park will serve as head of the ICT committee at the SK Group’s central decision-making body, dubbed the Supex council.

The SK Group describes Lee as having a “high-level of expertise in semiconductors” who can boost competitiveness at the company at a time when there are concerns the chip industry has reached its peak and is due for declines.

Yoon Byung-suk, senior executive vice president of the solution and trading business division at SK Gas, was promoted CEO of the company, and Na Kyung-soo, head of corporate strategy and development at battery maker SK Innovation, was promoted as CEO of SK Global Chemical.

The newly named chief executives are all in their early 50s.

Industry insiders speculated that the change at the top at SK E&C, with 59-year-old chief Cho Ki-haeng being replaced, was largely due to the partial collapse earlier this year of a dam in Laos being built by the company.

The company said the shift was part of a group-wide push to foster younger talent.

A total of 112 employees were promoted to executive positions through the reshuffle, similar to last year’s 107. Among the 112 promoted, eight were women. The group said the average age of its pool of executives is going down yearly. This year, their average age is 48, while last year the average was 48.7.

Apart from promotions, some organizational changes at SK affiliates were announced. As group Chairman Chey Tae-won has been stressing the corporation’s responsibility to create social value, the group’s IT service unit SK C&C expanded a business team dedicated to pursuing social value and upgraded it into a larger division.