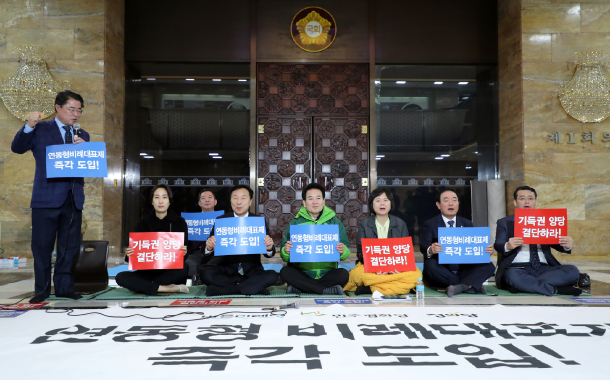 Major figures from three minor opposition parties stage a sit-in to demand electoral reform at the National Assembly on Wednesday, led by their chairpersons Sohn Hak-kyu of the Bareunmirae Party, fifth from right; Chung Dong-young of the Party for Democracy and Peace, center; and Lee Jeong-mi of the Justice Party, third from right. [YONHAP]

The ruling Democratic Party (DP) on Thursday cut a deal with its chief rival, the Liberty Korea Party (LKP), to pass the government’s bill for next year’s budget, after it was held hostage by three minor opposition parties’ demands for electoral reform.

The 470.5 trillion won ($419.7 billion) proposal - the largest ever - was in limbo for weeks after partisan wrangling made its passage increasingly unlikely at a plenary session on Friday, which is two days before the regular parliamentary session is set to end this Sunday.

The two rival parties initially disagreed on the budget bill itself, particularly a projected deficit of 4 trillion won. But this issue was largely resolved after the parties and the Finance Ministry agreed to issue government bonds to finance the deficit and cut around 5 trillion won from the original budget plan.

What really held the National Assembly back from approving the bill was a contentious and longstanding political debate over electoral reform in Korea, which came to a head earlier this month after the three minor opposition parties - the Bareunmirae Party (BP), Party for Democracy and Peace and the Justice Party - openly announced that they would only agree to passing the budget if the other two parties agree to parliamentary election reform.

On Wednesday, the heads of the three parties staged a sit-in protest at the National Assembly in western Seoul, demanding that the two largest parties ignore their vested interests and acquiesce to reforms.

The DP slammed the move on Thursday, with its floor leader Hong Young-pyo saying at a party meeting that it would “never agree to tie the budget proposal to electoral system [reform].”

Ostensibly, many DP members remain sympathetic to such reforms, which were actually pledged by President Moon Jae-in in his first presidential bid in 2012.

But in reality, as many analysts point out, the DP and the major opposition Liberty Korea Party, though ideologically distant, tacitly agreed to oppose reforms, given that the present system heavily favors the two largest parties.

This may be why a reluctant DP broke precedent to enlist the LKP’s help to pass the proposal Thursday afternoon, overriding objections by the minor parties.

The three minor opposition parties immediately slammed the DP-LKP agreement, with its floor leaders calling it an attempt to “stomp out political reform” at an emergency press conference. The BP’s chairman, Sohn Hak-kyu, said he would “put his life on the line” by immediately starting a protest hunger strike.

In the current electoral system, 253 of the 300 seats in the National Assembly are elected through a first-past-the-post system in single-member local constituencies, while 47 others are elected through proportional representation, in which voters pick the party of their preference and seats are awarded by the parties.

Minor party candidates rarely win seats in local constituencies, since voters tend to favor candidates from major parties who are realistically more likely to win races. This has made smaller parties heavily reliant on proportional representation to get into the legislature. The small number of such seats leaves them protesting that their nationwide support is rarely reflected in electoral results.

This issue has surfaced time and time again in Korean politics, with virtually every politician agreeing that the present system needs to be altered. But proposals for an alternative system have been numerous and often irreconcilable.

Ahead of the 2020 legislative elections, the three minor parties appear to have agreed among themselves that the most acceptable alternative would be to have a mixed system in which at least a third of parliament is elected through a region-wide party-list proportional representation system. This would work the same as a national system, except limited to a number of regionally delineated large constituencies where multiple members would be elected. Germany uses such a system for its federal lower house.

This however would mean reducing the number of single-member constituencies, which is opposed by representatives of districts likely to be cut. Or it could mean increasing the total number of seats in the legislature to up to 360 members, but the public’s distaste for partisan squabbling makes that proposal unpopular.