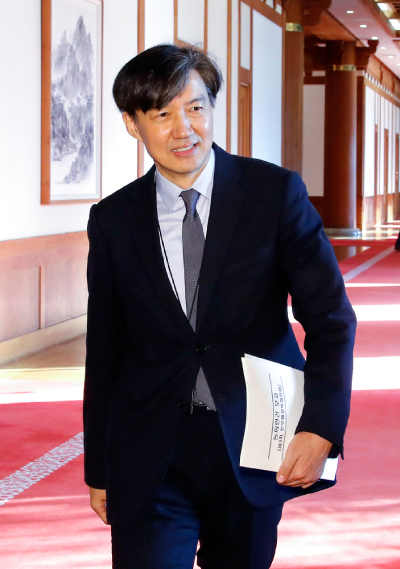 President Moon Jae-in ordered his senior secretary for civil affairs, Cho Kuk, to come up with ways to instill discipline among Blue House officials on Tuesday night, effectively dismissing mounting calls from opposition lawmakers to fire Cho over a scandal at a bureau he oversees.

For days, opposition lawmakers have pressed the Blue House to sack Cho over allegations that members of the special inspection bureau played golf during office hours and interfered in a police investigation when their job was to monitor corruption within organizations linked to the Blue House.

Moon made his first public statement on Cho’s scandal after he returned from an eight-day overseas trip earlier on Tuesday.

When asked by a reporter whether Moon’s order to Cho meant that he would keep his job as senior secretary for civil affairs, Kim implied that it did, saying that Moon “didn’t mention anything about changes to Cho.”

Moon was quoted as saying that the public will make a “proper assessment” on the accusations engulfing Cho once prosecutors finish investigating the case.

When a JoongAng Ilbo reporter asked Cho about his future plans, the secretary replied in a text message on Tuesday afternoon, hours before Moon touched down at Seoul Air Base in Seongnam, Gyeonggi, that he’d “cope with all the criticism and do what I have to do before going back to school,” apparently referring to his previous job as a professor at the Seoul National University School of Law.

One prosecutor was busted for asking the police for details into an investigation of his acquaintance, who was facing bribery charges. He pretended the case concerned officials in the Blue House.

The Blue House confirmed that the prosecutor made the request, but has yet to admit whether the bureau members went golfing.

On Nov. 30, the Blue House announced that all members of the inspection bureau will be replaced with new members and the old members will return to their original organizations. The special inspection bureau had 20 to 30 officials dispatched from the police, prosecutors’ offices, Board of Audit and Inspection and the National Tax Service.

The Blue House said it had no power to take disciplinary action against the dispatched officials, so it asked their respective agencies to investigate the matter on their own to decide whether the officials were involved in any misconduct and punish them if they had.

An official from the ruling Democratic Party (DP) said that Moon had no other choice but to keep Cho in his inner circle because firing him would only pave the way for opposition lawmakers to target another one of his closest aides, presidential chief of staff Im Jong-seok.

Dismissing Cho could undermine Moon’s judicial reform, a DP lawmaker pointed out. Cho had an integral role in designing Moon’s campaign to end the prosecution’s monopoly on investigative power and distributing it to the police.