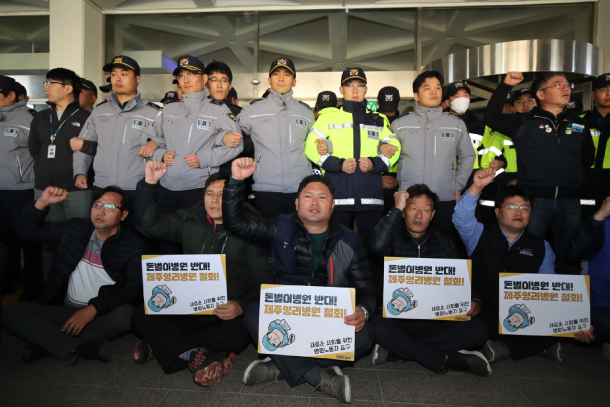 Members of a coalition of around 30 NGOs on Jeju opposed to for-profit hospitals in Korea stage a rally in front of the Jeju provincial government office on Thursday, a day after Jeju’s governor gave permission to a Chinese company to open Korea’s first for-profit hospital on the island. [NEWS1]

Civic groups warned of nationwide protests against the Jeju government on Thursday and urged the island’s governor to retract his approval of a Chinese company’s bid to operate Korea’s first for-profit hospital.

A coalition of around 30 nongovernmental organizations on Jeju opposed to for-profit hospitals in Korea said it was planning to talk with other civic groups in other parts of the country by the end of this week on how to react to Jeju’s recent decision. It plans to officially kick off rallies next week in case nothing changes.

Yang Yeon-jun, the head of a labor union of medical workers in Jeju, said that Jeju Gov. Won Hee-ryong should apologize for ignoring the conclusion of a committee of experts who recommended that the government reject the plan to open a for-profit hospital. Kim Deok-jong, the Jeju leader of the Korean Confederation of Trade Unions, vowed to protest Won and the hospital until he withdraws his approval.

Choi Dae-zip, chairman of the Korea Medical Association, visited Jeju on Thursday and asked Won to retract his approval, citing his fear that the for-profit hospital may “damage the principle of medicine” when its main purpose is the creation of profit.

On the other hand, many Seogwipo residents living near the hospital welcomed Jeju’s decision on Thursday, hoping that the hospital would lead to more jobs for young people.

On Wednesday, Won announced that he was giving permission to Greenland Group - one of China’s largest real estate developers - to open Korea’s first for-profit hospital in Seogwipo in southern Jeju. The announcement came over a year after Greenland completed construction work for the Greenland International Hospital in July 2017.

The Shanghai-based company had been waiting for final approval from the Jeju government after gaining initial approval from the central government in 2015 to establish the for-profit hospital. The Jeju provincial government delayed in making the final call for months due to fierce opposition from local civic groups who fear that the for-profit hospital may wreak havoc to the country’s public health care system and inflate medical bills.

The Jeju government explained that Greenland International Hospital will not affect Korea’s medical system because Korean nationals will not be allowed to receive services there. The for-profit hospital will only be allowed to provide medical services to foreign visitors to Jeju in its four departments: plastic surgery, dermatology, internal medicine and family medicine.

Jeju’s approval of the Chinese company came even as a Jeju committee of experts formally recommended that the island turn down the request. The Jeju branch of the ruling Democratic Party criticized Won, a conservative, for bypassing the committee’s recommendation.

Jeju officials said that the province had no other choice but to allow Greenland to operate because failing to do so could “severely” damage the province’s international credit rating. If Won had postponed making a decision any further, Jeju officials claimed that Greenland could have taken the case to court for compensation.