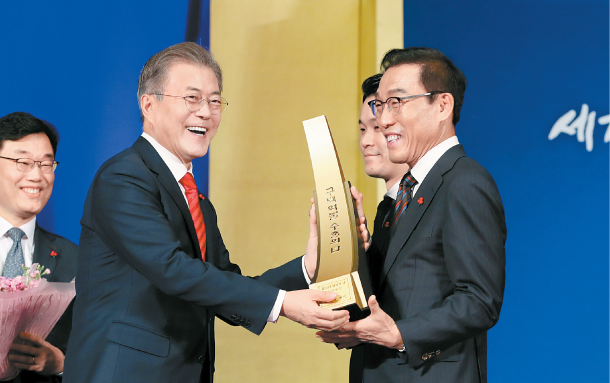 President Moon Jae-in, while praising Korea’s export achievements this year, also stressed the need for this success to contribute to inclusive growth.

“Since the first Korean export ship set sail for Hong Kong with squid on board, the road to economic development through exports was opened up. In 1964, we were able to reach the $100 million mark, a dream in 1964,” President Moon Jae-in said during a speech in celebrating the 55th Trade Day held at Coex, Gangnam District, southern Seoul, on Friday.

It was the first public event he attended since returning from an eight-day overseas trip, which included the G-20 Summit in Buenos Aires.

“This year, we project that exports for the first time will reach $600 billion, 6,000 times the size of the $100 million achieved 54 years ago,” Moon said. “A country which ranks 27th by population and 107th by land size is now a powerful export country ranking sixth in the world, a surprising achievement.”

“The International Monetary Fund estimates our GNI [gross national income] per capita will reach $32,000, making us the world’s seventh country to join the 30-50 club - $30,000 in GNI per capita, 50 million population - meaning were are an economically powerful country, which is something to be proud of,” Moon said.

However, the president noted that such achievements shouldn’t be the end of the story.

“The expansion in exports now has to translate into the expansion of good jobs, which will lead to the improved lives of the people,” he said.

“The trickle-down effect no longer works,” Moon said. “It’s hard to revitalize the economy with past economic policies, which is a problem that many other countries share.”

He said inclusive growth is the solution for which the world is collectively searching.

“Growth can be sustained, and each and every one of us can live well,” Moon said. “The benefits of export growth can be equally distributed to all people when income-led growth and innovative growth based on a fair economy is achieved.”

The Moon administration has been under attack over its income-led growth policies, including the minimum wage hike, which were supposed to secure sustainable growth by improving the incomes of the lower and middle-income households and therefore encourage more spending.

However, the rapid increase in wages is seen as the primary reason for the heavy job losses. For the past four months, job increases have totaled fewer than 100,000 per month, a stark contrast to the 316,000 jobs that were added every month in 2017.

With many in lower-income households employed in temporary positions most sensitive to the minimum-wage jobs losses, such as those in restaurant and convenience stores, the income gap in the third quarter this year grew to the widest in 11 years. While the bottom 20 percent by income experienced a monthly income drop of 7 percent, the top 20 percent enjoyed an 8.8 percent rise.