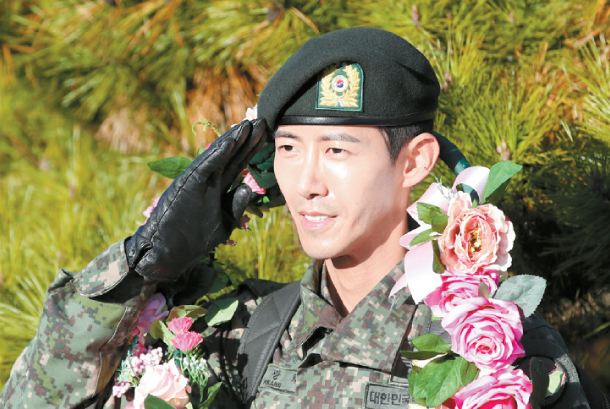 Singer Hwang Kwang-hee from boy band ZE:A was discharged from the military on Friday after serving for 21 months.

The singer greeted his fans and the press in front of the Seoul National Cemetery in Dongjak District, southern Seoul, on Friday morning.

“Thank you to all those who had come to see me in this freezing cold weather,” he said. “I didn’t expect so many people to wait for me, but I am happy that so many people have cheered me on.”

He then encouraged his friends who are still serving in the military.

“I have a lot of friends who are in the military including G-Dragon and Taeyang [from boy band Big Bang] and Im Si-wan [from ZE:A],” he said. “I wish everyone serving in the military good luck.”

Hwang, who debuted in 2010 with the group ZE:A, is best known for appearing on several popular reality programs such as “Infinite Challenge,” which aired its last episode in August.

He is set to return to MBC’s reality show “Omniscient Interfering View,” which is hosted by entertainers such as Jeon Hyun-moo and Lee Yeong-ja.