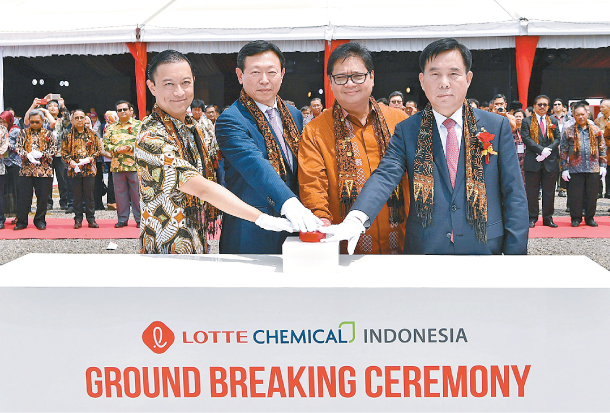 Lotte Group Chairman Shin Dong-bin promised to continue to invest in the conglomerate’s Indonesian ventures at a groundbreaking ceremony for a chemical manufacturing complex, two months after being released from jail.

Shin attended the groundbreaking ceremony for Lotte’s new chemical facility in Java on Friday. He was joined by some 500 officials including Indonesian Industry Minister Airlangga Hartarto and Thomas Lembong, chairman of the Indonesia Investment Coordinating Board.

“With this project, we hope to greatly expand investment in Indonesia and also take on social responsibilities,” said Shin. “Lotte and Indonesia will become good friends that can grow each other’s potential.” Lotte is expected to invest around 4 trillion won ($3.57 billion) into the project.

Lotte will build the chemical complex on 470,000 square meters (5.06 million square feet) of land it previously purchased from state-run Krakatau Steel through Lotte Chemical Titan, the group’s Southeast Asian chemical arm based in Malaysia. The ceremony kicked off Lotte Chemical Titan’s construction of the complex, which is due to be completed by 2023.

Lotte Chemical acquired Lotte Chemical Titan in 2010 for 1.5 trillion won. The company has grown 2.5 times in value in the past seven years and is currently listed on the Malaysian stock exchange.

Shin flew to Indonesia on Thursday to oversee the conglomerate’s various business activities in the country. The business tycoon also stopped off in Vietnam to visit the conglomerate’s Vietnamese operations on his first official overseas trip since he was released from jail in October. Shin served eight months in jail for bribery charges in a corruption scandal connected to former President Park Geun-hye.

Lotte Cultureworks opened the first Lotte Cinema in November in Jakarta. Lotte Asset Development, another subsidiary active in Indonesia, pursues real estate and infrastructure development there. Lotte Accelerator, which helps start-ups, has signed a memorandum of understanding with the Indonesian Ministry of Communication and Information Technology to expand the local start-up ecosystem.