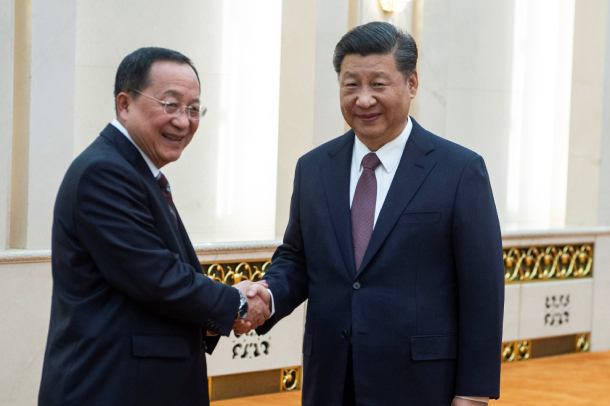 Ri also met with Chinese President Xi Jinping at the Great Hall of the People later that day.

According to the Chinese Foreign Ministry, Wang encouraged North Korea and the United States to “maintain dialogue and resolve their concerns in a balanced manner to implement the goals of the joint agreement” signed by U.S. President Donald Trump and North Korean leader Kim Jong-un on June 12 in Singapore.

Ri and Wang also held talks at the Diaoyutai State Guesthouse, where Wang likely briefed Li on the results of the U.S.-China summit in Argentina last week and discussed bilateral ties.

After the talks, the Chinese Foreign Ministry said that Ri told Wang that North Korea’s ruling Workers’ Party is “working toward creating peaceful external conditions in order to implement an important decision.”

Ri maintained there has been “no change” in North Korea’s position of focusing on denuclearizing Korean Peninsula and maintaining peace and security. He also stressed his desire “for the North and the United States to head in the same direction based on mutual trust.”

Wang told Ri that China and North Korea need to “work actively for progress toward the larger picture of denuclearization on the Korean Peninsula.”

He also conveyed that “China supports the strengthening of inter-Korean exchanges and cooperation toward reconciliation.”

During the talks, Ri lauded China’s efforts to resolving the Korean Peninsula situation, adding that North Korea and China will work together through continued communication and cooperation for the stability and development of the Korean Peninsula and the region. He also forecasted large-scale exchanges next year between North Korea and China as they mark the 70th anniversary of bilateral ties. Wang, in turn, expressed Beijing’s support for North Korea’s efforts toward economic development and improvement of the livelihood of the people and deepening the relations between the two countries through an event to celebrate the 70th anniversary of their ties.

Ri arrived in Beijing on Thursday for a three-day visit, less than a week after a bilateral summit between Trump and Xi on Dec. 1 in Buenos Aires on the sidelines of a G-20 meeting. After their talks, Trump said that Xi agreed to “work with me 100 percent on North Korea” and emphasized China’s role in resolving the denuclearization issue.

Ri’s visit to China on Beijing’s request was previously unscheduled and came after a trip to Vietnam last week and Syria earlier this week. The Chinese Foreign Ministry announced the meeting Tuesday.

Ri’s visit to Beijing so soon after the Trump-Xi summit was seen as a chance for Pyongyang to get a sense of Washington’s thoughts ahead of a second North-U.S. summit that Trump said would happen next January or February.

At that same time, Ri was expected to try to gain Beijing’s support in UN Security Council sanctions relief amid its denuclearization negotiations with Washington. They could also have discussed a possible visit by Kim to Seoul within the year to follow up South Korean President Moon Jae-in’s visit Pyongyang in September. Ri’s talks in Beijing could influence Pyongyang’s next steps in the denuclearization negotiations. The North has recently been unresponsive to scheduling talks with the United States.

They could also have discussed a potential trip to Pyongyang next year by Xi for a summit with Kim.