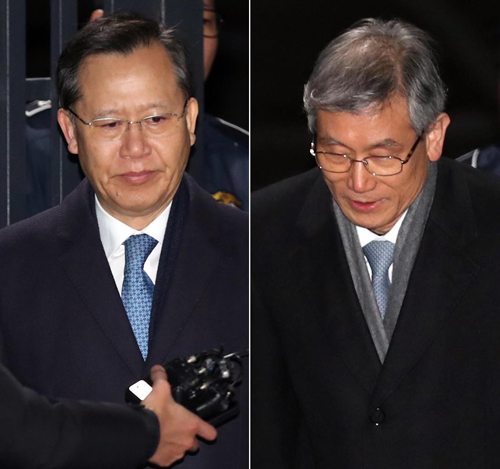 The court said arresting the two former justices is not necessary at this stage of the investigation, though the prosecution said the rejection of the warrants would hinder their investigation.

“It was unclear if the suspect was involved in a large part of the charges laid out against him,” said Judge Im Min-sung of the Seoul Central District Court as he dismissed the arrest warrant request for Park. “Additionally, a lot of evidence has already been collected on the case, and the suspect has been cooperative and did not show signs that he will destroy evidence. There is little reason or need for an arrest warrant at this stage.”

Judge Myung Jae-kwon, who dismissed the arrest warrant request for Ko, said that, “Enough evidence has been collected on the case, including through a raid on the suspect’s home.”

The investigations began in May after allegations surfaced that Yang colluded with justices in the Supreme Court to influence politically sensitive trials to curry favor with the Park Geun-hye administration, a violation of the constitutional principle of separation of powers. In return, Yang allegedly expected former President Park Geun-hye to help establish a new appellate court to cut down on the Supreme Court’s heavy workload.

Yang was chief justice of the Supreme Court from 2011 to 2017. He served most of his term under former President Park, who was impeached for corruption and abuse of power last year. Former Justices Ko and Park are suspected to have colluded with Yang while they were heading the National Court Administration (NCA), the Supreme Court’s administrative body. Ko served as the NCA chief from February 2016 to May 2017. Park headed the NCA from 2014 to 2016.

Park, along with Yang, is accused of colluding with the Park Geun-hye administration to delay and possibly rule against Korean plaintiffs who sued Japanese companies for forcing them to work during World War II.

Fearing the cases’ effect on diplomatic relations with Japan, the Park government is believed to have asked the Supreme Court to postpone rulings on the matter for as long as possible. During this period, nearly all of the original plaintiffs passed away.

Judge Park met with then Blue House Chief of Staff Lee Byung-kee in April 2015. The prosecution alleged this was when the two discussed delaying the rulings.

Park denied the accusation. He said in his warrant hearing on Friday that “the meeting was not about the case but about an offer of the prime minister position from the Blue House.”

Ko is also accused of covering up a bribery case involving an appeals court judge in Busan in 2016. Prosecutors suspect that Ko used his influence to overlook the judge’s wrongdoing because the judge had close ties with Hyun Ki-hwan, then-presidential secretary for political affairs.

Ko is also suspected to have had a hand in influencing a trial concerning a progressive teachers’ union with the intention of suppressing the union, allegedly in line with the Park administration’s policy. The prosecution suspects that Yang used Park and Ko’s connections to lobby the presidential office to set up a separate court of appeals, his long-time goal.

The prosecution protested the dismissal of the arrest warrants.

“The case concerns serious top-down corruption deals made by the court,” said a prosecution official. “The court stopping the arrest of Park and Ko, who headed the NCA, while allowing the arrest of Lim Jong-hun, a former deputy head of the NCA, is a move to stall an all-out investigation on all levels in the court.”

“The move is an ill one made by the court,” said a prosecutor. “The citizens of the country will see the decision as one to protect the judiciary branch.”

Both Judges Im and Myung, who dismissed the arrest warrant requests, have not worked for the NCA.

The prosecutors are said to be considering resubmitting its requests for arrest warrants for Park and Ko. Yang will be summoned for questioning in the near future, though the timing, a prosecution official said, will “depend on the result of investigation of materials raided from Kim & Chang.”

Last month, prosecutors raided the offices of Kim & Chang, Korea’s largest law firm. Two of Kim & Chang’s lawyers, former Blue House legal counsel Kwak Byung-hoon and another attorney surnamed Han, have been accused of playing key roles in the collusion between the Supreme Court and the Park Geun-hye administration to delay damage suits filed by Korean plaintiffs against the Japanese companies that forced them into labor during World War II.