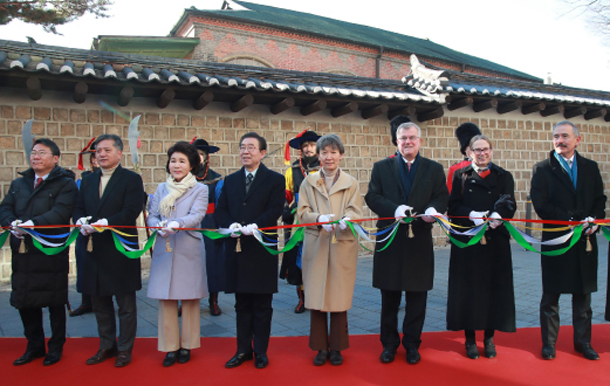 The Seoul metropolitan government opened the entire walkway encircling Deoksu Palace to the public on Friday, almost 60 years after it was first blocked off by the British Embassy. Seoul Mayor Park Won-soon (fourth from left), Chung Jae-suk, head of the Cultural Heritage Administration (fifth from left), British Ambassador Simon Smith (sixth from left) and U.S. Ambassador Harry Harris (eighth from left) cut the tape to celebrate the opening of the entire walkway encircling Deoksu Palace on Friday. The access to the pathway, popularly known as Doldamgil, came on the heels of the embassy’s agreement in August last year to transfer 100 meters (328 feet) of the stone-paved pathway to the city government. The 100-meter road was originally owned by the Seoul metropolitan government. But the embassy did not return the remaining 70 meters of the pathway, which Britain purchased for the construction of its legation in Seoul in 1883, as lodgings for embassy staff and its main gate are located nearby. The British side was reluctant to leave the 70-meter section open for security reasons, but the city government and the Cultural Heritage Administration persuaded the embassy to accept compromise measures to create a road inside the place that leads to Doldamgil and build an exit by the stone wall for the embassy. The embassy and the palace are divided by the wall. The 70-meter road inside the palace is only open during visiting hours. [YONHAP]