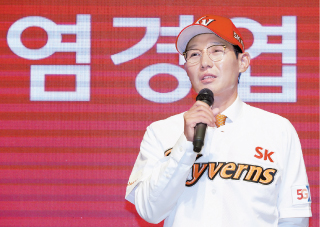 In the KBO’s 37 years, it’s unheard of for a club to change their manager right after winning the Korean Series.

However, this year, the SK Wyverns had no choice but to make a change at the top, after Trey Hillman announced that he would be stepping down after the season right before the Korean Series began for family reasons.

Starting next season, the Wyverns will be led by manager Yeom Kyung-yup. Yeom, who previously served as the Wyverns’ general manager, signed a three-year contract with the Wyverns on Nov. 13 for 700 million won ($621,950).

“I thought about it a lot because the only way for me to maintain the team’s performance is to win another title,” Yeom said. “I thought it would be a very difficult position to be it. I must be stupid.”

Despite the high expectations, Yeom signed on as a manger for the upcoming season to fulfill his final career goal. Yeom has experienced the Korean Series title as a player and a general manager but hasn’t won a single title as a manager.

As a KBO player, Yeom had two Korean Series victories -- in 1998 and 2000 -- with the Hyundai Unicorns. Once he retired in 2001, Yeom started working for the Unicorns’ front office. As part of the team’s staff, Yeom won two more Korean Series titles ? 2003 and 2004. Yeom served as the Nexen Heroes’ manager for four seasons but wasn’t able to win the Korean Series during his time there. Yeom led the young team to the Korean Series final once, in 2014, but lost to the Samsung Lions.

It’s been less than a month since Yeom was appointed as a manger but he is busier than ever. Over two days last week, Yeom held a meeting with the coaching staff to talk about how to improve the club and to emphasize that the coaches need to be studying all the time.

Since Yeom’s time as a player, he has been known for studying the theories of the sport. He often visited bookstores and bought baseball-related books and videos to gain more knowledge.

Once he starting working in the front office, he always carried a pen and notebook with him to write down game strategies and notes about players. The notes became useful when he became manager of the Nexen Heroes -- the young manager was often complimented for being a strategic thinker.

Since Yeom became the Wyverns’ general manager in 2017, he has written memos on his phone rather than carrying around a pen and a notebook.

Once, Yeom gave his notebook to the coaches and players and told them to train accordingly, but no one could understood his notes.

When asked about the Wyverns’ biggest threat in the upcoming season, he chose the Doosan Bears, the Heroes and the Lotte Giants ? a surprising pick, as they finished seventh this season.

“Lotte has a strong batting lineup and they have a good closer,” Yeom said. “If they can find good foreign players, they’ll be a stronger team. I think I’m pretty good at these things. In the beginning of this season, I told manager Hillman that I’m about 70 percent sure that our team will win.”

In addition to making predictions, Yeom has also been successful when it comes to trading players. As a general manager, Yeom made three trades ? outfielder Noh Soo-kwang, pitcher Kim Taik-hyung and infielder Kang Seung-ho. All three eventually found a spot in the starting lineup.

“I thought they were needed on our team and they played well,” Yeom said. “But now, trades aren’t my responsibility. I’m sure our new manager, Son Cha-hoon, will make better decisions.”