[Debriefing] Are autos hitting the wall?

[Debriefing] Are autos hitting the wall? 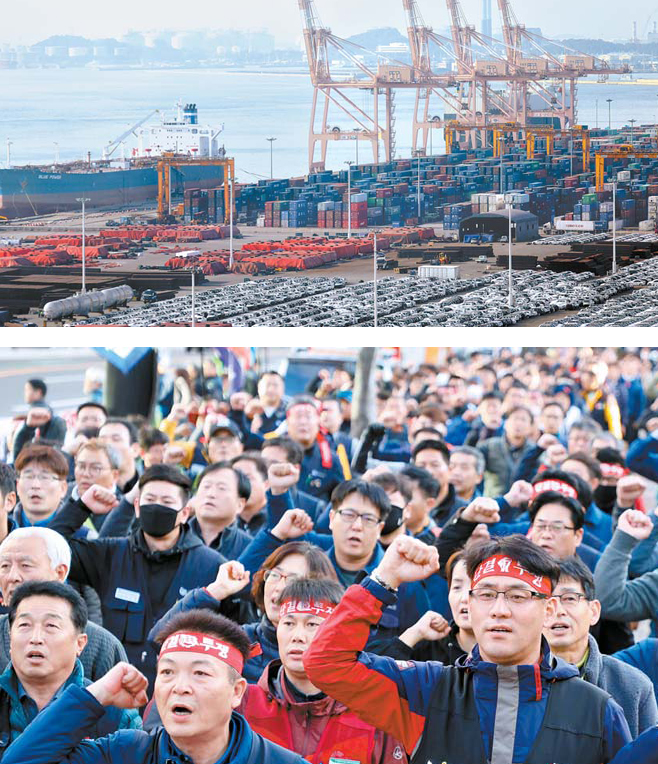 Top: Cars are waiting to be exported at the pier of Pyeongtaek Port on Oct. 25. Bottom: a labor union at Hyundai Motor’s Ulsan plant stages protest in front of Ulsan City Hall on Nov. 14 in opposition to the Gwangju employment plan. [NEWS1]

Cars are one of the industries that made Korea an industrial powerhouse. Now, it is one of the most endangered.

The engine that helped power Korea’s economic growth for the past five decades is losing competitiveness - and quickly. High labor costs, faulty readings of the market and external diplomatic land mines have led to slumping sales for domestic carmakers and even a factory being closed.

Hyundai Motor, the nation’s largest automaker, enjoyed a 10.3 percent operating profit rate in 2011, which fell to 3.5 percent in the first half of this year.

Carmakers and the government have even proposed an entirely new industrial structure to lower labor costs - a going back to the drawing board that proves that current ways are unsustainable. But even that hope for resurrection could be nipped in the bud by unions.

Korea’s auto industry which triumphantly became the world’s fifth-largest in 2010, recently dropped to No. 6, giving way to India. It is on the verge of dropping one more notch this year because of Mexico. 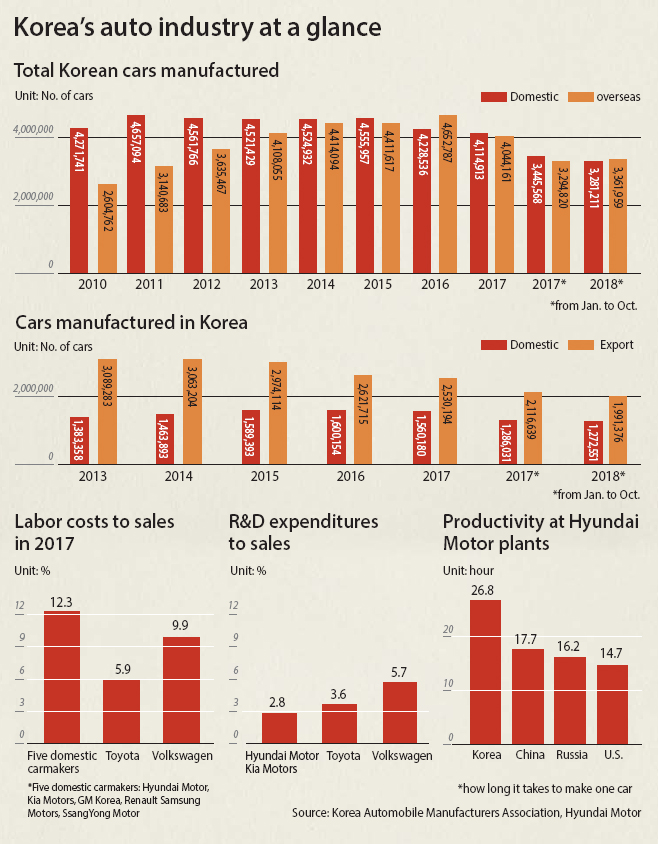 Q.What are the numbers?

Korea’s auto industry is on the verge of missing the 4 million mark in domestic production for the first time in eight years. The number of cars made in Korea hit 3.28 million as of October, a 4.8 percent drop compared to the same period last year. Domestic production peaked at 4.6 million in 2011.

Overseas production, on the other hand, is generally growing, except for last year when diplomatic conflict with China hindered production in that country. Production of vehicles at Hyundai Motor and Kia Motors’ overseas plants in the United States, China, the Czech Republic, Brazil, Russia, Turkey, India and Slovakia was 2.6 million units in 2010. That number jumped to 4.6 million in 2016.

The number of cars exported from Korea is declining steeply. In 2013, Korean carmakers exported some 3.1 million cars. In 2017, that number had dropped to 2.5 million and as of October, only 1.9 million had been exported this year.

According to the Korea Employment Information Service, the number of people employed in the auto industry was 395,000 as of October this year, which is 10,000 less than last year. The employment number is the lowest since Sept. 2015.

Q. Are certain markets better than others?

Unfortunately, the Korean carmakers are doing badly in markets that matter the most - the United States and China, the world’s top two auto markets.

Hyundai Motor and Kia Motors sold 1.2 million in the United States last year, down from 1.4 million in 2016. Analysts say their readings of the U.S. market were way off. While the global trend is shifting towards bigger cars such as SUVs and pick-up trucks, particularly in the United States, Hyundai and Kia have persisted in what they are good at: making sedans. Hyundai Motor has belatedly added SUV models to its lineup, but it is expected to take some time to see an increase in U.S. sales.

Things in China are worse. In 2017, Hyundai Motor and Kia Motors sold 1.14 million units compared to 1.79 million units the previous year. A diplomatic conflict over the deployment of an U.S. anti-missile system chipped away at sales last year. And Hyundai Motor is losing competitiveness with Chinese carmakers, which are catching up in terms of quality while offering much lower sticker prices.

Q. What are Korea’s areas of strength and areas of weakness in carmaking?

Hyundai Motor’s success is based on price-competitive sedans. Its sedan lineup defined by the small Avante, midsize Sonata and large Grandeur powered sales growth in and outside of Korea. In the United States, the sticker price for a Sonata is $22,300 while Toyota’s competing Camry starts from $24,000.

In terms of quality, Korean carmakers are at the top of their game. In this year’s JD Power survey, the Genesis, Hyundai Motor and Kia Motors were ranked one, two and three in the quality test, with Porsche and Ford coming in fourth and fifth. (Genesis is the luxury brand of Hyundai Motor). On their first time on the list in 2000, Hyundai was ranked 34th and Kia 37th.

The Genesis G70 was even named Car of the Year by U.S. auto magazine Motor Trend this month, acknowledging its outstanding performance as well as its sleek and luxurious design. This shows that Hyundai Motor and its affiliates have grown beyond their value-for-money image.

Yet, the conservative automaker is slow in grasping market trends and reflecting them in a strategy. Sales in the United States are faltering due to its sedan-centered lineup. The launch of the luxury Genesis lineup in 2015 was a bit late. Toyota and Nissan launched Lexus and Infiniti in the early 2000s. What’s more baffling is that the luxury brand started off with three sedans first instead of SUVs.

Q.Much has been written about Korea’s domestic factories being so much less efficient than other countries. How big a problem is this?

Korea’s auto unions are infamous for making big demands - and getting them. According to 2016 statistics by the Korea Automobile Manufacturers Association, average yearly compensation for workers at the five domestic carmakers was 92.1 million won ($82,049). At Toyota, it was 91 million won and at Volkswagen, 80.4 million won.

The labor cost-to-revenue ratio for the five Korean carmakers is 12.3 percent, while Toyota’s is 5.9 and Volkswagen’s 9.9 percent. Carmakers’ labor unions ask for raises that are above the inflation rate every year. If the negotiations don’t go smoothly, the annual ritual of walkouts and factory suspension begin, taking their own toll on the bottom line.

Last year, Hyundai Motor’s union staged one of its longest walkouts, a total of 24 strikes. Production of more than 77,000 vehicles was disrupted, costing the company about 1.6 trillion won.

Even beyond high wages, the efficiency of assembly plants in Korea is questionable. It takes 26.8 hours to assemble one car at Hyundai Motor’s Korean factories. That figure drops drastically for its overseas plant. A plant in Beijing takes 17.7 hour and in Montgomery, Alabama 14.7 hours, according to Hyundai Motor.

Q. Is there a chance the Korean carmaking companies - mainly Hyundai and Kia - could live on but the cars would be made everywhere but Korea?

It may be tempting to the carmakers, but their union would not allow it. The company already has to get approval from the union to import any models that are made at Hyundai or Kia’s overseas factories. It is highly likely, however, that Korean carmakers will downsize domestic production as much as possible while expanding overseas plants. In fact, Korean carmakers have shied away from building new plants in Korea. Hyundai Motor built its Asan factory in 1996 and GM Korea built its now-closed Gunsan plant in 1997. No other car plants have been built since.

Q. Tell us about the Gwangju proposal. That sounds like a total reinvention of an industry - with lower-paid workers.

The Gwangju employment plan was considered a breakthrough for Hyundai Motor to get some relief from high labor costs while expanding production. It is inspired by Volkswagen’s Auto 5000 project, through which the German carmaker built an auto factory in 2002 to hire 5,000 employees at wages 20 percent less than the average at the time. It was a very successful project.

Hyundai Motor and the city of Gwangju agreed to build a joint venture plant in Gwangju capable of producing 100,000 cars per year. Some 12,000 new jobs would be created. The annual wage for workers would be set between 35 million and 40 million won compared to the industry average of above 90 million won. Workers at the factory would be hired by the city, not the carmaker.

Hyundai Motor said it would invest 50 billion won in the factory and make small SUVs.

Yet Hyundai Motor’s union is strongly opposing to the plan and threatening strikes if the project is finalized between the city, local labor union and the carmaker. They say lower wages in Gwangju would eventually affect their own wages. Negotiations have been going on since early this year.