The same ski slope where American stars Lindsey Vonn and Mikaela Shiffrin competed against each other in February is once again coated with white snow. However, unlike other slopes that are filled with skiers, the Jeongseon Alpine Ski Centre on Mount Gariwang in Gangwon is empty, filled with only the memories of cheering crowds and feats of athleticism.

This is the same ski center which was complimented by the International Olympic Committee as one of best in the world. But now, instead of its entrance being festively decorated to welcome guest, it is covered with banners like: “The Alpine Ski Centre determines the region’s economy” and “the preservation of the ski center should be the government’s mission.”

“I heard that it was going to take billions of won to return it back to its [natural] state, but shouldn’t some of the facility be used as a tourist attraction?” said Yoon, a resident who is living in an village adjacent to the ski center.

The future of the Jeongseon Alpine Ski Centre is turning into a battle between governmental agencies.

The Gangwon provincial government and Jeongseon County government have come to the consensus that the ski center should partially be preserved as a tourist attraction.

“Even if the [natural] ecosystem is restored, facilities like the gondola should remain as a tourist attraction,” said an official from the Jeongseon County government. 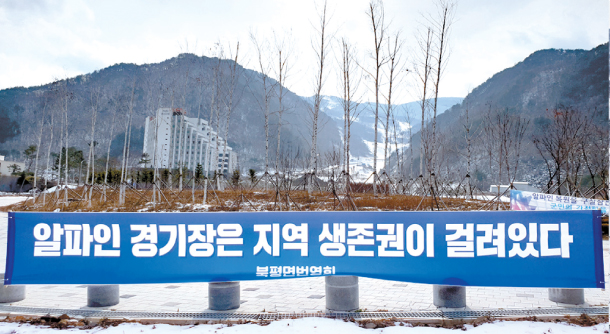 A banner, above, which demands that the ski center continue to be used as a sporting venue. [PARK JIN-HO]

Both governmental agencies agree that it would be impractical to deconstruct the ski center after only using it for a couple of days, especially considering that the venue cost 20.3 billion won ($18 million) to build in the first place.

The Gangwon provincial government submitted a plan on Nov. 19 to the Korea Forest Service, which went into detail about the future usage of the Alpine Ski Centre.

The plan stipulates that Mount Gariwang’s ecosystem will be restored under the condition that the gondola stays intact.

The plan also explained that an additional 1,000 trees will be planted in the area and an exhibition building near the ski center entrance will be constructed to educate visitors about the importance of people coexisting with the forest environment.

This plan is in line with Gangwon Gov. Choi Moon-soon’s hopes to keep the Alpine Ski Centre as it is in order to make a bid to cohost the 2021 Winter Asian Games with North Korea.

“About 70,000 tons of waste will come out of the deconstruction process as well as having to plow 35,000 tons of land,” said an official from the Gangwon provincial government. “It will cost 20 billion won to restore [the mountain] back to its original ecosystem, and we must not ignore the danger of a mountain slide occurring during the restoration process.”

However, the Ministry of Environment and Korea Forest Service wants to dismantle the ski center to restore the mountain’s original environment.

In August, the Gangwon provincial government originally introduced a plan to restore the mountain environment under the condition that the gondola stays intact. The Korea Forest Service rejected this plan since it was different from the original plan to completely restore the forest environment.

The Korea Forest Service planned to hold a meeting on Nov. 30 at the Central Government Complex in Daejeon that would focus on reviewing the proposal given to them by the Gangwon provincial government on Nov. 19.

However, the agency decided to delay the meeting to Dec. 21, as they thought it was unfit to open another meeting when the proposal from the Gangwon government was not significantly different from all the previous proposals submitted.

As the future of the ski center is still up in air, the Gangwon government asked the Korea Forest Service to use 71 percent of the state-owned land (101 hectares) until August 2023 in October. However, the proposal was deferred.

Environmental activist groups also are pointing out that the central and provincial governments promised to restore the mountain’s ecosystem before the PyeongChang Winter Olympics started.

“All nations [that have hosted the Olympics] came up with detailed plans as to how the facilities will be used [after the Olympics],” pointed out Bae Je-seon of environmental organization Green Korea. “In January, before the Winter Olympics started, the Gangwon provincial government came up with a plan to restore Mount Gariwang’s ecosystem after the games ended. They should keep their promise.”

The controversy regarding Mount Gariwang first started in July of 2011, right after Pyeongchang was chosen as the host of the 2018 Winter Olympics. The mountain was immediately picked as a candidate as it fit the International Ski Federation (FSI) requirements.

These were having an altitude difference of 800 meters (2,624 feet) between the starting and finishing point for the course and an average slope inclination of 17 degrees and enough space to fit all the different ski courses.

However, several environmental activist groups protested against using the mountain as an Olympic venue, as it was included in a forest conservation area. Creating ski slopes would destroy the local ecosystem, they argued.

The Korea Forest Service finally allowed the Gangwon provincial government to construct ski slopes on Mount Gariwang in March 2014, under the condition that the Gangwon government create an ecosystem restoration plan and implement it after the Winter Olympics.