That’s the tag line for an advertisement for marijuana, which is illegal in Korea, popping up on social media.

The drug trade, which used to be confined to the dark web, is coming out of the shadows and fishing for customers through advertisements on social media sites. 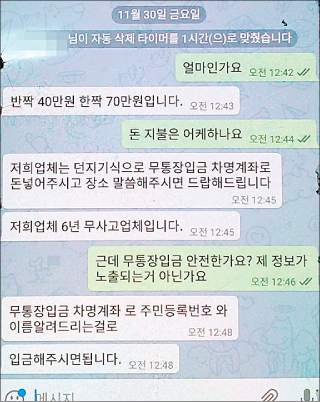 Above is a screen grab of a conversation between a drug buyer and dealer. The dealer gives directions for payment. [PARK HAE-LEE]

On Twitter alone, at least 29 ads for marijuana pop up after one searches using the term “joint.”

According to the police, they cracked down on 1,389 cases of illegal drug dealing through social media in the first nine months of the year, which exceeded last year’s total of 1,100 cases drug related crimes.

YouTube - the online video sharing platform - is a hotbed for drug dealers. The site, which is frequented by underage users, openly lists videos about how to smoke marijuana. Contact information is posted with the videos for viewers who want to purchase these illegal drugs. On some sites like Craigslist, drug advertisements are disguised as used goods for sale.

Drug dealers responsible for these advertisements go to tremendous lengths to keep their identities hidden. They communicate via anonymous social media accounts.

Customers must pay through untraceable means like bitcoin, gift cards from the online gaming site Steam, or through bank transfers.

The dealer usually chooses a secluded place to leave the illegal drugs, like an office building restroom. The location is only revealed to the customer after the dealer has deposited the goods there.

In as little as 30 minutes, customers are able to get their hands on the drugs they purchased.

“As the advertisements for illegal drugs posted on the Internet increase, more and more people from the younger generation are giving in to these temptations,” said Jeon Yeong-sil, a researcher from the Korean Institute for Criminology.

“There are cases in which the offenders don’t realize that they committed a crime, what with the increasing number of advertisements that are posted [on the Internet].”

Customers come from all parts of society: fitting models, tattoo artists, athletes, part-time convenience store workers. Most recently, a plastic surgeon was arrested after buying 4.29 grams of methamphetamine from a drug dealer via YouTube. He was sentenced to a year in prison, but the sentence was suspended for three years.

Investigations into these dealers have proven to be difficult. The biggest obstacle is that many dealers use encrypted chatting apps, which investigators cannot trace.

The means of payment is also an obstacle. “They ask their customers to put their payments into a bank account that is opened under [a stolen or fake identity],” said Kang Jeong-seon from the Mapo District Police Agency. “This is why it is hard to trace their original identity.”