A former Korean baseball league pitcher convicted of match-fixing charges claimed on Monday that a fellow ex-player was innocent of the same offenses, saying that prosecutors had been untruthful during their investigation. 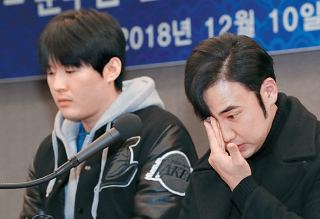 Lee Tae-yang, left, and Moon Woo-ram speak at a press conference in Seoul on Monday. [YONHAP]

Lee said that Moon was wrongfully accused of being part of a fixing scheme just because Moon was with Lee when the latter met with a fixing broker on May 22, 2015.

Lee said he spoke to the broker alone, without Moon, on May 28, about fixing his start the following day.

Lee claimed that prosecutors in Changwon, South Gyeongsang, handling the case tricked him into testifying that Moon was involved.

“During the early investigation, one prosecutor told me that some money was taken out of Woo-ram’s bank account so I could be paid for fixing. I assumed that Woo-ram must have been aware of this and just told the prosecutor that Woo-ram knew what was going on,” Lee said. “But the prosecutor lied about it. Once I found out it wasn’t true, I tried to take my statement back, but no one would listen to me,”

Moon, fighting back tears, said, “Even if I never play baseball again, I want the truth to come out.”