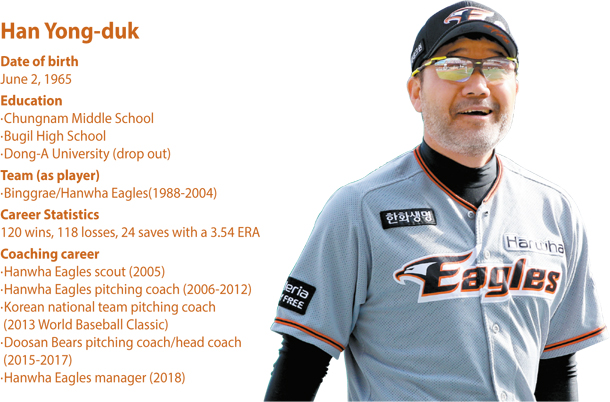 Han Yong-duk may have never been the best player, but he is off on a different path as manager.

Only in his first season as the Hanwha Eagles’ manager, Han successfully led the long-time bottom ranked team to a third-place finish. Although the Eagles didn’t win the regular season title, the team advanced to the post season for the first time in 10 years. In the past 10 seasons, the Eagles have finished last five times.

Throughout the season, Han showed strong charisma and emphasized his rules. In October, Han abruptly sent veteran Song Kwang-min to the Futures League as punishment for breaking those rules.

“Even if there is a problem within the team, the manager is suppose to resolve it without letting the media know about it,” Han said. “Since Song Kwang-min is becoming a free agent player, his punishment could have affected the market.”

As Song showed a change in his attitude, Han called him back up to the roster in the postseason.

Han actually gave up baseball while attending Dong-A University due to a knee injury. After quitting baseball, Han completed his military service and became a truck driver.

Although Han had the best season of his career in 1991, he was never able to be the best in the league as Sun Dong-yol, formerly of the Haitai Tigers, was the dominant pitcher at the time. During the 1991 season, Han finished third in wins, at 17, second in winning percentage, at .739, and third in ERA, at 2.23.

Once Han retired in 2004, he started his coaching career. In 2005, Han served as the Eagles’ scout and from 2006 to 2012 he served as the club’s pitching coach. Before becoming manager, Han was a pitching coach for the Korean national team at the 2013 World Baseball Classic and coached the Doosan Bears from 2015 to 2017.

Below are edited excerpts from a JoongAng Ilbo interview with Han.

Q. Were you expecting the team to make this achievement this year?

A. When I was a player, I was always second, no matter how good I was, because Sun Dong-yol, former national team manager, was always at the top. But in my first year as manager, I just won an award.

Towards the end of the season, the players seemed to be injured and struggled. What happened?

I knew about the slump and injuries that players would sustain throughout the season, but it was harder than I expected. If we didn’t have that two-week break in August, we probably would have gone down in the standing because we relied heavily on our bullpen pitchers due to a weak starting rotation. Just like the players, I also got tired.

You always stand throughout the game. Aren’t you tired from standing for so long?

It’s not easy to stand for three hours straight every day, but I do it to keep the tension for the players. Although the players get to sit on the bench, since I’m standing, they don’t lose the tension throughout the game.

Communication between players and managers is important. How are you handling it?

From the manager’s standpoint, there isn’t a single player that lives up to my requirements. But I try to think from the players’ perspectives; I expanded my understanding by working with former manager Kim In-sik and current Doosan Bears manager Kim Tae-hyung.

The Eagles were ranked second in terms of come-from-behind victories. What changed this year?

The reason why we had so many come-from-behind victories was because we had 13 pitchers in our entry [rather than 12]. Since we had weak starting pitchers, we used all our bullpen pitchers to avoid giving up more runs and waited for our opportunity for a come-from-behind victory. We were able to pressure the opponents by having Lee Tae-yang and Song Eun-beom as bullpen pitchers instead of starters. But at the same time, this also meant we had one less player in our entry for fielders so coach Jang Jong-hoon had a hard time. I felt really bad.

Thanks to the Eagles’ postseason advancement, fans returned to Daejeon Hanbat Baseball Stadium. How did you feel to see that many fans cheering for your team?

When I served as the Doosan Bears coach, I felt a lot from the Hanwha fans’ loud cheers and their passion for the team. It felt more like resentment for being the lower ranked team for years. So I wanted to change that to joy. When I see the fans, I recognize what our team has to do.

What has Hanwha got in stock for next year?

We desperately needed the addition of Yang Eui-ji, but I gave up because I felt the strong desire of our catchers wanting to be better.

Unlike last year’s end of year training, this year I increased the daily number of pitches for our young pitchers from 150 to 170. The players are competing against one another and are improving. My biggest concern is our aging batting lineup, but it’s not easy to change right away. I’m going to save our older players and try to use younger players that are in the Futures League more.
!