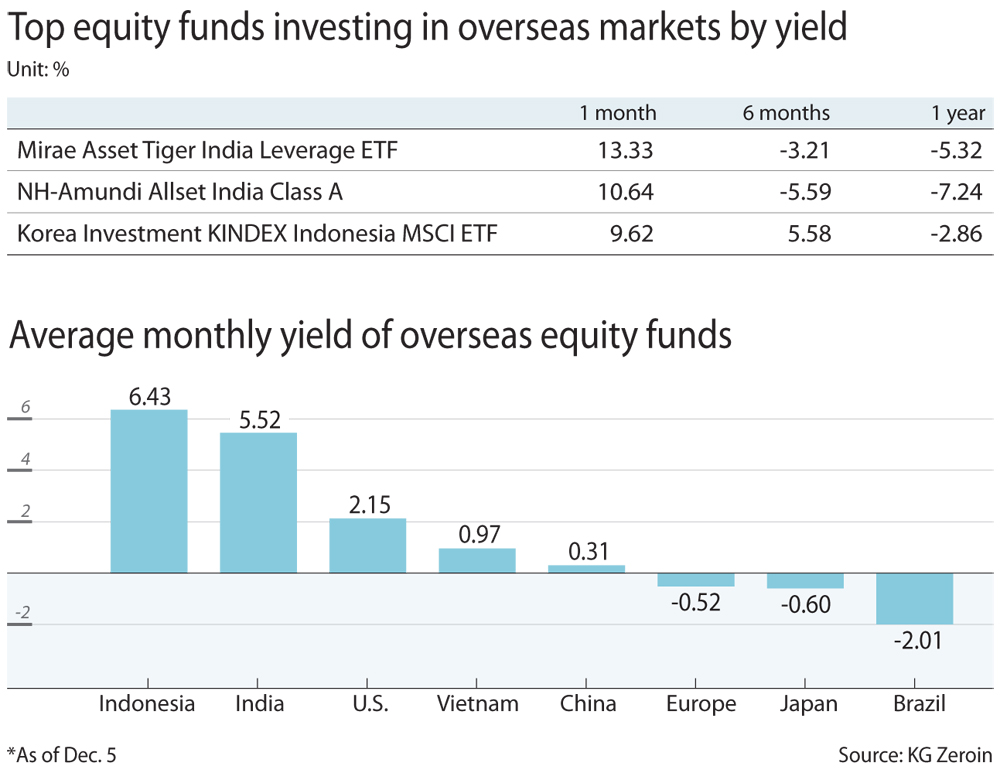 While many of the funds investing in overseas markets this winter are struggling, there are two markets that still offer potential: India and Indonesia.

According to the fund evaluation firm KG Zeroin, the fund that had the highest yield from Nov. 5 to Dec. 5 among the 628 funds investing in overseas markets was Mirae Asset Tiger India Leverage ETF at 13.33 percent. Another Indian investing fund, NH-Amundi Allset India, came in second with 10.64 percent. These were the only two with a yield that exceeded 10 percent.

On the contrary, equity funds investing in Vietnam struggled with an average 0.97 percent, while those investing in China averaged 0.31 percent.

Those investing in the Korean market didn’t do much better, at 1.01 percent.

Funds investing in Europe actually suffered a loss of 0.52 percent, while those investing in Japan also suffered the same fate at minus 0.60 percent and Brazil with minus 2.01 percent.

India is considered to have benefitted from the recent trade feud between the United States and China.

The global market seemed to stabilize earlier this month when U.S. President Donald Trump met with China’s President Xi Jinping during the Group of 20 Summit held in Buenos Aires. The two agreed to suspend the trade tariffs dispute for 90 days.

However, this sentiment quickly turned around when the chief financial officer and daughter of the founder of China’s Huawei, Meng Wanzhou, was arrested in Canada at the request of the U.S. government on charges of violating the Iran sanctions.

With U.S. government pressure on China showing no sign of relief, many foreign companies that have operations in China appear to be considering relocating to neighboring India in hopes of dodging U.S. retaliatory tariffs.

Funds’ investing in Indonesia have also been enjoying rising yields for similar reasons.

The falling international crude price is also having a positive effect on the Indian financial market.

India is the world’s third-largest crude oil importer after the United States and China.

Another reason behind the bullish trend in India and Indonesia is that these two areas are among the emerging markets that were hit heavily by the U.S. Federal Reserve’s interest hikes.

When looking at Indian and Indonesian investing funds’ yields by six months or a year, many of them suffer from a 10 percent or so loss. As such, the recent rebound is even higher than it appears at first glance.

But experts are still cautious about investing in India or Indonesia as the two countries are not immune to the effects of the ongoing trade feud between the United States and China.

One of the biggest risk factors is the devaluation of India’s rupee and Indonesia’s rupiah against the U.S. greenback.

“These two countries could suffer a loss from the forex exchange, not because of external factors, but because of the weakening of the rupee and rupiah,” said Moon Nam-joong, a strategist at Daishin Securities. “However, as the domestic markets are recovering thanks to the large population, the economies being affected by external factors will gradually shrink.”