‘Default’ holds off competition for second week: ‘Bohemian Rhapsody’ continues to rock and roll in its sixth weekend

‘Default’ holds off competition for second week: ‘Bohemian Rhapsody’ continues to rock and roll in its sixth weekend 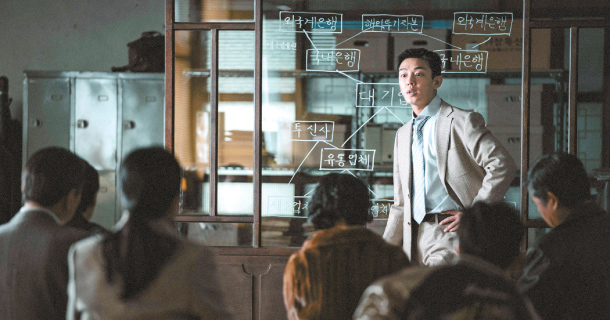 “Default” stayed at the top of the box office for the second straight weekend amid a slew of new releases like “Door Lock” and “The Nutcracker and the Four Realms.” [CJ ENTERTAINMENT]

Despite several new releases hitting theaters last week, the best-performing movies over the weekend stayed the same. While “Default” stayed atop the Korean box office for the second straight week, the sensational “Bohemian Rhapsody” impressively took the second place spot in its sixth weekend.

From Friday to Sunday, “Default,” set right before a wave of bankruptcies that overwhelmed Korea and led to the International Monetary Fund bailout of the country in 1997, sold 631,000 tickets at 982 screens, accounting for 25.9 percent of the entire weekend ticket sales revenue. According to the data provided by the Korean Film Council on Monday, the movie pulled in 5.59 billion won ($5 million) over three days.

Since its release on Nov. 28, the movie, starring Kim Hye-soo, Cho Woo-jin and Yoo Ah-in, has sold a total of 2.7 million tickets.

Right behind “Default” was “Bohemian Rhapsody.” In its sixth weekend, the movie, about the British rock band Queen and its lead singer Freddie Mercury, sold 592,000 tickets at 965 screens from Friday to Sunday.

Since its release on Oct. 31, the movie has sold more than seven million tickets, and has raked in more than 61 billion won as of Sunday.

Although the horror movie “Door Lock,” adapted from Spanish horror title “Sleep Tight” (2011), started off strong in its debut on Wednesday and continued staying atop the daily box office for the next two days, its performance dropped slightly over the weekend.

Over three days, “Door Lock,” about a woman whose house is continuously being intruded by a mysterious and frightening stranger without her knowledge, sold 572,000 tickets, with total ticket sales adding up to 823,000. The movie shows the realistic dangers, threats and fears a woman living alone could experience.

The movie stars Kong Hyo-jin as the woman living alone, Kim Ye-won as her supportive co-worker and Kim Sung-oh as a detective.

Disney’s live action fantasy film “The Nutcracker and the Four Realms,” arrived at a distant fourth.

The widely-anticipated movie, starring Keira Knightley, Helen Mirren and Mackenzie Foy, sold only 74,000 admissions. The adaptation of the ballet classic aimed for a splash just ahead of the upcoming Christmas season, but failed to seize people’s hearts.

It features a fearless, young and intelligent heroine named Clara (Foy) who has difficulty getting over the death of her mother. Feeling lethargic and filled with grief, she questions her place in the world. Things suddenly change when Clara receives a locked egg-shaped music box without a key from her father on Christmas Eve. Determined to find out what’s inside, Clara starts a journey to find the key. In the process, she enters a far-away land, where she embarks on a dangerous yet fulfilling journey. 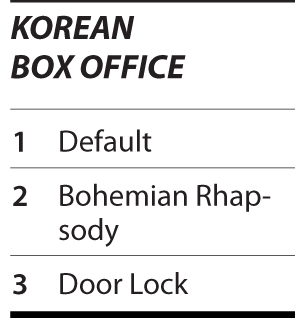 “Mortal Engines,” another new release, rounded out the top five.

An adventure fantasy story adapted from the young adult book series by Philip Reeve sold 131,000 tickets over the three days.

Set in a post-apocalyptic world, where humans live in moving cities that devour smaller towns, the movie revolves around a group of people who try to prevent London - a giant predator city on wheels - from devouring everything in its path.