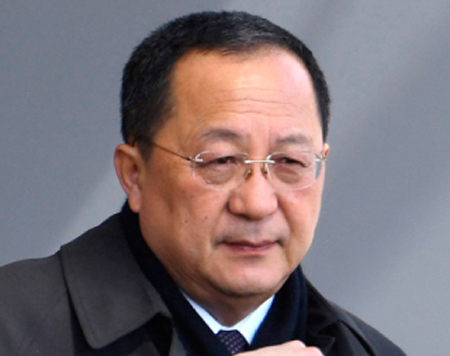 North Korean leader Kim Jong-un is stalling on whether to visit Seoul within the calendar year, but a response from Kim isn’t likely until North Korean Foreign Minister Ri Yong-ho, who has been traveling overseas since last month, returns to Pyongyang.

Ri, one of Kim’s key foreign policy strategists, made an unscheduled stop in Beijing last week from Thursday to Saturday, where he met with Chinese President Xi Jinping briefly and held talks with Foreign Minister Wang Yi. During the visit, Ri was briefed by Chinese officials on U.S. President Donald Trump and Chinese President Xi Jinping’s summit in Buenos Aires on the sidelines of the Group of 20 leaders’ meeting earlier this month.

“Following the U.S.-China summit, President Donald Trump said that China agreed to work with him ‘100 percent on North Korea,’ and the two countries seemed to be cooperating closely on the Korean Peninsula issue,” a source familiar with the situation said. “Chairman Kim thought to hear directly from China what the United States is thinking and how it is planning to go about the denuclearization negotiations.

“The United States has been making remarks on the taboo issue of sanctions relief, and contacting North Korea to draw them out to the negotiating table, though North Korea has been unresponsive,” the source added. “However, Chairman Kim’s other concern is that it is difficult to read the situation by shutting itself in.”

Ri has been overseas for the past 10 days. He first visited Vietnam and Syria before making his three-day visit to China upon Wang’s invitation. From there, Ri headed to Mongolia for a two-day visit through Sunday, where he held talks with Mongolian Foreign Minister Damdin Tsogtbaatar and agreed to the strengthen bilateral cooperation as the two countries mark the 70th anniversary of their establishment of diplomatic ties this year.

Analysts have pointed out that it is rare for North Korea’s top envoy to be abroad for such an extended period of time, especially as Kim must decide whether to visit Seoul this year. The decision on the visit will likely play an important role in the ongoing North-U.S. denuclearization negotiations and inter-Korean relations.

The North’s official Korean Central News Agency (KCNA) reported Ri’s meeting with Xi and Wang on Sunday. Xi was quoted by the KCNA as telling Ri that China is “attaching high importance” to Beijing-Pyongyang relations and that it is “the fixed policy of the Chinese party and government to develop the China-DPRK friendly relations.” DPRK is the acronym for North Korea’s official name, the Democratic People’s Republic of Korea.

The KCNA also said that Ri and Wang discussed “expanding and developing the traditional bilateral friendly relations next year to mark the 70th anniversary of the establishment of diplomatic relations between the two countries and on issues of mutual concern.” The Chinese Foreign Ministry echoed a similar message in a statement Sunday, saying that Xi told Ri that the Chinese government attaches great importance to North Korea-China relations. It called for expanding relations to mark the 70th anniversary of bilateral ties next year.

People’s Daily, the Chinese Communist Party’s official newspaper, reported after Ri’s visit that China supports North Korea’s new strategy of developing its economy and that it will continue to support its political stability, economic development and reform of the people’s livelihood.

The main objective of Ri’s visit to Beijing was likely interpreting the United States’ mindset through China’s perspective.

Xi’s in person meeting with Ri could be a sign that the Chinese leader had a message that he wanted to convey to the North Korean leader. Kim not making a visit to Beijing in person and sending his top envoy instead could be a move to avoid riling Trump while keeping diplomatic formalities with China.

Kim made three visits to China this year for summits with Xi ahead of major negotiations with the United States. The visits can be considered meetings to plan out strategy, and Trump has responded sensitively to such meetings. He has several times accused North Korea of changing its attitude because of China.

After canceling planned high-level talks in New York between Kim Yong-chol - the vice chairman of the Central Committee of the North’s ruling Workers’ Party - and U.S. Secretary of State Mike Pompeo on Nov. 8, Pyongyang has been unresponsive to Washington’s requests for talks. Washington has been pushing to switch its North Korean high-level counterpart from Kim Yong-chol to Ri Yong-ho, but Pyongyang likewise hasn’t been responsive to this either.

Thus Kim Jong-un is likely to make a decision on whether to visit Seoul and answer Washington’s requests for talks based on Ri’s report on his meeting with Xi.

China experts who visited Beijing recently have said that as the United States has not granted the North any sanctions relief, Pyongyang has been hoping that China gives it more breathing room. Ri’s charm offensive has also seen some success at the United Nations. On the sidelines of the new UN General Assembly session in New York, Ri met with foreign ministers from around 20 countries.