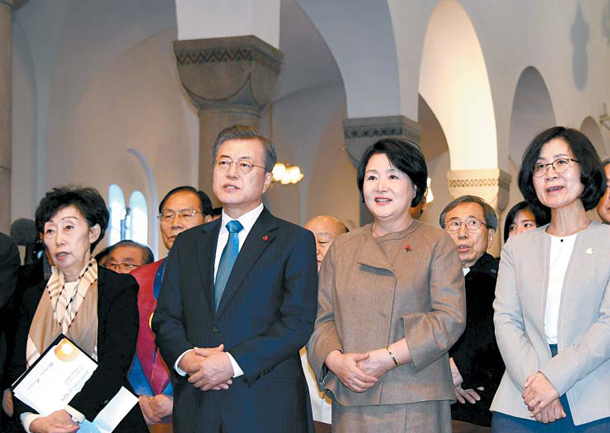 In a speech celebrating Human Rights Day, President Moon Jae-in said Monday in central Seoul that eliminating the remains of the Cold War on the Korean Peninsula and establishing a permanent peace is the way to improve the human rights of the “entire Korean people.”

Without directly mentioning North Korea or its dismal human rights record, Moon, a former human rights lawyer, said during a ceremony at the Seoul Anglican Cathedral in Jung District, central Seoul, that South Korea had “a long way to go” on the human rights issue because the Korean War hasn’t fully ended, subtly hinting at the need to proclaim an end to the war.

Both Koreas have been pushing for an end-of-war declaration by the end of this year, but the United States has refused, viewing the idea as a concession to Pyongyang. The 1950-53 Korean War ended in an armistice, not a peace treaty, technically leaving the divided Koreas still at war.

Moon promoted his “embracing society” policy in the same speech Monday, saying his administration would do its best to create a society where every person, including the “socially weak,” live with equal rights - where children can rest and play, where workers can work under fair and “advantageous” circumstances and where families can live in “proper living standards” for their health and happiness.

Hours later, just across the street from the church, a forum on North Korean human rights discussed how the Moon government was ignoring Pyongyang’s brutal treatment of its own people.

Peter Jung, a pastor and director of Justice for North Korea, a civic group based in Seoul, said at the forum that North Korean human rights were excluded from talks between the two Koreas because Seoul didn’t want to endanger South-North and North-U.S. summits supposed to be held soon.

Jung said 70 years have passed since the Universal Declaration of Human Rights was proclaimed, yet North Korea’s human rights situation “hasn’t changed one little bit.” The activist added that if the issue continues to be ignored during Seoul’s talks with Pyongyang, “genuine peace” cannot arrive on the Korean Peninsula.

Lee Yeong-ju, a 44-year-old North Korean defector who settled in the South, described her experiences at North Korea’s infamous Chongo-ri concentration camp in North Hamgyong Province, saying she was imprisoned after being caught by Chinese authorities trying to escape from the North twice before she actually succeeded. At the camp, Lee said she could barely stand on her two feet after seeing young women bloodied from severe beatings.

Moon has refrained from mentioning North Korea’s human rights situation in order not to provoke Pyongyang, which sees it as an infringement of its sovereignty. During an interview with the BBC last October, Moon said the key to improving North Korean human rights was to bring the North into contact with the outside world through cooperation with the international community and South Korea, rather than internationally pressing the country to change its behavior.