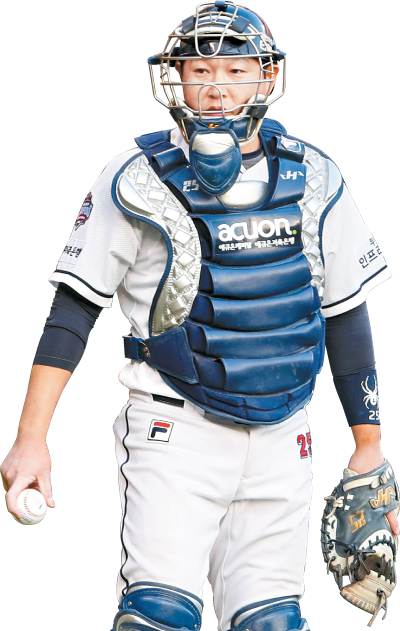 “Yang Eui-ji is an outstanding catcher and a great hitter,” said Dinos general manager Kim Jong-moon. “Considering the development of our young pitchers and the team’s overall strategy, we tried really hard to add him.”

As the Dinos are moving to a new stadium in Changwon under the direction of new manager Lee Dong-wook, the addition of Yang could well help the bottom-ranked team return to familiar ground near the top of the leaderboard in 2019.

By buying Yang, the Dinos became one of the biggest spenders in the FA market this year. The Changwon-based club has also signed a three-year contract with Mo Chang-min at 1.7 billion won, the first FA to sign this year. The Dinos have also spent the maximum $1 million on both of the foreign players they have signed so far this year - Eddie Butler and Drew Rucinski.

The SK Wyverns is still the biggest spender this year as they spent 17.5 billion won in re-signing their two FA players - third baseman Choi Jeong and catcher Lee Jae-won.

“I found a new opportunity and decided to challenge myself,” Yang said. “Rather than be satisfied about where I am now, I’ll try harder to become a better player.”

Yang may now be one of the most dominant players in the KBO, but it hasn’t all been plain sailing. In June 2017, Yang was caught by a stray pitch, injuring his finger and taking him out for a month. His return to the team wasn’t easy, and he struggled to find his old rhythm. He ended the 2017 season with a batting average of .277, his lowest since 2013.

This season didn’t get off to the most auspicious start either. Yang was criticized for unsportsmanlike conduct after allegedly intentionally missing a catch in an attempt to hit the umpire. During the Bears’ game against the Samsung Lions on April 13, Yang got up and moved to his right rather than trying to catch Gwak Been’s warm-up pitch, leading the ball to sail between home plate and umpire Jung Jong-soo’s legs.

However, Yang didn’t let that hold him back. Instead, he finished his last season with the Doosan Bears with a career best .358 batting average, 23 home runs and 77 RBIs in 133 games.

By having the best season of his career, Yang’s FA signing was expected to easily exceed 10 billion won. Since most of the KBO clubs struggle to find a strong catcher like Yang, rumors about where he would end up have dominated headlines since the Korean Series ended in November.

Although the Doosan Bears hoped to retain Yang, manager Kim Tae-hyung told reporters after a sports awards ceremony on Tuesday that he sensed Yang was leaving when he received a phone call from him instead of a notice from the club.

“Yang Eui-ji told me he was sorry about the move, but I said he didn’t need to be because he is a professional athlete going to a team that recognized his value,” Kim said. “He just feels more special to me than other players because I first saw him when he was still a teenager.”

For the Bears, this is the second consecutive year that the club has failed to retain one of its key players. Last season, the Bears lost outfielder Min Byung-hun went to the Giants.

Shortly after Min left the Bears, Kim Hyun-soo announced his return to the KBO after two seasons in the United States. At the time, fans expected Kim to return to the Bears, but instead he signed a four-year contract with the LG Twins at 11.5 billion won.

The Bears were reported to have offered 12 billion won to Yang, including options.

Despite the losses, the Bears didn’t exactly struggle throughout the 2018 season - they won the pennant - mainly thanks to the club’s strong farming system. The 2019 season may well be a different story as Yang is considered the best catcher in the KBO.

“We shouldn’t worry about how we’re going to compete next season without him,” Kim said. “It’s up to me and my staff to bring out the best in the players. I think we have enough assets. We shouldn’t start fretting about next season before we get there.”