The Korean women’s handball team finished their year by winning the 2018 Asian Women’s Championship at Kumamoto, Japan, on Sunday. 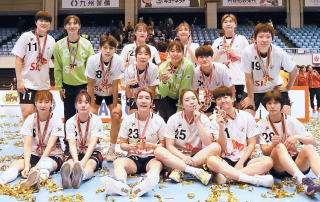 Korea defeated Japan 30-25 in the final for their 14th Asian Championship victory. By winning the tournament, Korea qualified for the 2019 World Women’s Handball Championship in Japan, which is scheduled to take place from Nov. 30 to Dec. 15 next year.

Throughout this year, Korea has managed to top Asia twice, also winning the gold at the 2018 Asian Games in August. At the time, Korea defeated China 29-23 in the final. Since handball became an official event at the Asian Games, Korea has won seven out of eight times.

In addition to the Korean women’s team’s dominance in Asia this year, their achievement is even more meaningful as the team is made up of mostly young players, suggesting that there are no worries in the foreseeable future as a generation change is not likely to bother the Korean squad.

At both tournaments, Korea was unable to field its strongest team. National team regulars Ryu Eun-hee, Shim Hae-in both missed out on the Asian Games, while Kim On-a wasn’t able to play at the Asian Championship. Despite the weakened roster, the team showed no sign of struggling in either event.

The absence of the veterans actually gave the younger players, who are all in their early 20s, a lot more opportunity to show their potential during the Asian Games.

“If they can get more experience, they will be the players that can be much better than the veteran players on the team,” said Yoo Hyun-ji, the captain of the Korean national handball team at the Asiad.

Following the victory at the Asian Games, Yu So-jeong was added to the national team for the Asian Championship and showed significant improvement in her ability to score.

In addition, Kang Eun-hye showed improvement by scoring 11 points throughout the tournament and high school player Park Ji-won scored the team’s highest points in a single game, seven, during a game against India.

While the young players slowly adjusted to the senior team, veterans Lee Mi-gyeong and Jung Yu-ra didn’t disappoint, scoring 28 and 32 points respectively throughout the Asian Championships.

During Korea’s final game against Japan, Ryu stepped up her game by leading Korea to a come-from-behind victory. Ryu scored 11 points all by herself in the finals, good enough to win tournament MVP.

With great teamwork between the rookies and the veterans, the Korean women’s handball team has raised expectations for the upcoming 2020 Tokyo Olympics.

Korea was once a powerhouse in women’s handball, winning two back-to-back gold medals at the 1988 Seoul and 1992 Barcelona Olympics. Since the team’s bronze medal finish at the 2008 Games, Korea has slowly been forgotten on the international stage, finishing fourth at the 2012 London Olympics.

At the most recent Olympics in Rio, Korea had an early exit, finishing 10th.

Even at the World Championship, Korea hasn’t advanced further than the quarterfinals since winning a bronze in 2003. Currently, Korea is ranked 10th in the International Handball Federation ranking.