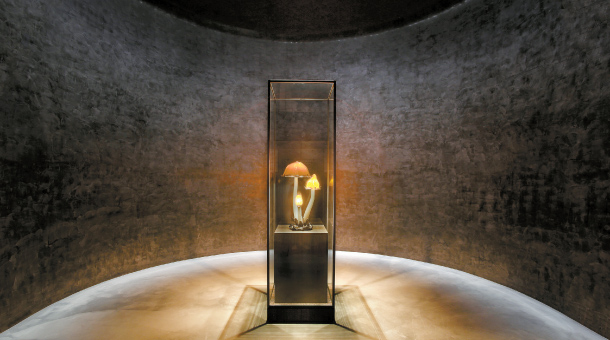 The “Les Coprins” lamp created by Emile Galle in the Masterpiece Gallery of the Yumin Art Nouveau Collection, which was recently crowned the 2018 World Interior of the Year, [YUMIN ART NOUVEAU COLLECTION]

The Yumin Art Nouveau Collection, a museum famous for its glass artwork exhibits and its architecture in harmony with the scenic Seopjikoji cape on eastern Jeju, was recently named the 2018 World Interior of the Year.

The museum’s interior, designed by Denmark’s JAC Studios, was crowned not only as the winner of the Display category, but also as the overall winner among the 70 finalists across 10 categories at the 2018 Inside World Festival of Interiors.

The annual international festival, which took place from Nov. 28 to 30 in Amsterdam, accompanied the World Festival of Architecture. Together, they form one of the world’s largest celebration of architecture and design.

The judges were impressed with “its crafted sensitivity to both the building and the Galle glass to which the museum is dedicated,” according to the press release.

The Yumin Art Nouveau Collection’s buildings and gardens actively embrace the island’s volcanic nature within them, while the glass artworks on display in the museum reproduce the fauna and flora of Northeastern France in elegant Art Nouveau styles. The exhibits are the collection of the late Hong Jin-ki, the co-founder and former chairman of the JoongAng Ilbo.

Art Nouveau, literally meaning “new art,” is a style of decorative arts that was most popular in Europe in the late 19th and early 20th centuries. It is characterized by fluid forms and elegant and rhythmic curves that were inspired by nature. The museum focuses on glass works by craft masters like Emile Galle and the Daum Brothers based in the northeastern French city Nancy, which represented a large part of the French Art Nouveau movement. 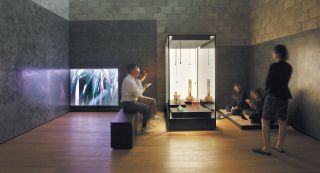 The Inspiration Gallery at the Yumin Art Nouveau Collection, where visitors can sit on the ground and quietly contemplate while observing art. [YUMIN ART NOUVEAU COLLECTION]

The museum’s gardens and buildings were originally designed by the renowned Japanese architect Tadao Ando as a meditation center 10 years ago. They were renovated by JAC Studios, who transformed the space into a museum of elaborate displays and lights to maximize the beauty of Art Nouveau glass works glowing in rich colors. The redesigned museum opened in June 2017.

“The architecture by Tadao Ando plays a magnificent setting for the exhibition,” Johan Carlsson, the founder of the studio, said. “The architecture is in itself a piece of art and visitors cannot avoid being touched by its beauty. The new museum is respectful, but also challenges the context of the architecture.”

His remark is visible from the entrance of the museum, which features yellow, mirror-like glasses on the facade. The glass “reflect[s] the horizon of the sea, and with each hour, the patterns and colors on the facade could change with the weather,” described Carlsson.

It seems to be Carlsson’s response to the concept of the so-called “borrowed scenery” which Ando used for the original design. A wall made of basalt unique to the volcanic island has an opening carefully designed by Ando so that the Seongsan Ilchulbong tuff cone, one of the island’s landmarks, can be seen clearly across the sea through the opening, just like a beautiful framed painting.

Inside the museum, there are four main rooms that display the representative works of the Art Nouveau glass works: the Inspiration Gallery, the Peak of Art Nouveau Gallery, the Masterpiece Gallery and the Lounge Gallery focusing on lamps.

One of the highlights of the museum is the lamp “Les Coprins,” the only art piece located in the center of the Masterpiece Gallery. The lamp, which features three mushroom branches, symbolizing a human’s youth, middle age and old age, was created by Galle during his peak in 1902. Now, only five pieces in its image exist in the world and the one at the Yumin Collection is the one that is best preserved, the museum said. Visitors can walk around the room and observe the piece up close from every angle.

Meanwhile, visitors of the Inspiration Gallery can sit on the ground and quietly contemplate while observing the art. In the Lounge Gallery, they can enjoy the gleaming lights and the colors of the lamps.