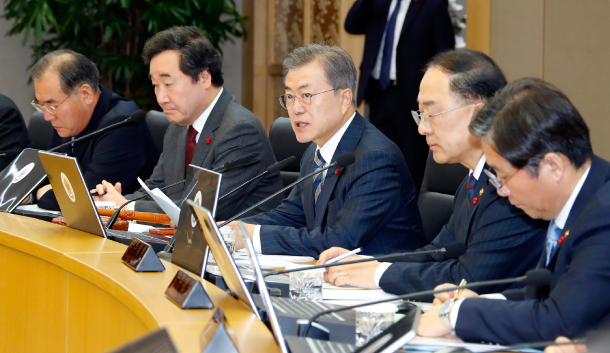 The government will frontload spending in 2019, committing 70 percent of its budget in the first half of next year to boost the stagnant economy, with a particular focus on creating jobs.

According to the Ministry of Finance and Economy on Tuesday, 281.4 trillion won ($248.9 billion) out of the 399.8 trillion won budget for next year will be spent in the first six months of 2019. The 399.8 trillion won figure excludes government-run funds, such as the National Pension Fund and the fund for cooperation between South and North Korea. If these are included, the budget comes to 469.6 trillion won, a record and up 9.5 percent from last year.

Of outlays in the first half, the government plans to commit 78 percent to creating jobs.

The decision was made during a cabinet meeting attended by President Moon Jae-in and Hong Nam-ki, the new deputy prime minister of economics and finance minister.

It was the first meeting President Moon attended at the government complex in Sejong since he took office in May last year.

“From a macroeconomic point of view, our economic indices can be said to be strong,” President Moon said during the meeting. “However, the indicators on livelihoods and jobs, which people are sensitive to, continue to struggle.” 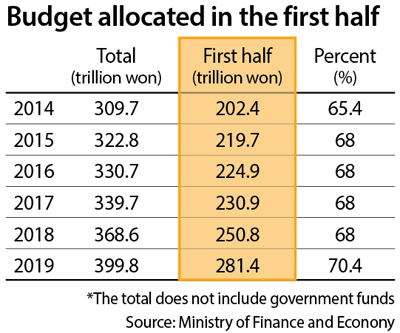 He mentioned the wealth gap, difficulties faced by small businesses and challenges in traditional industries, such as shipbuilding, auto manufacturing and steel making.

Moon said only when these problems are solved will it be possible to achieve inclusive growth, where everyone lives well. During the meeting, Moon said his expectations are high for Finance Minister Hong, who was officially appointed Monday.

“While predecessor Kim Dong-yeon did well and worked passionately, I hope this will be an opportunity for achieving new vitality in our economy,” Moon said.

The popularity of President Moon has been falling. Although a recent poll indicated some recovery in favorability after a continuous drop for nine consecutive weeks, the rate remains below 50 percent. Moon has been scoring especially poorly in terms of job creation, the most critical economic issue so far this year.

But the lack of employment opportunities isn’t the only problem faced by the Moon government.

According to a recent study by the Korea Development Institute, a state-run think tank, Korea’s exports, which have contributed significantly to economic growth, have been losing steam, while domestic demand remains weak. The report noted that sales of major export items, such as semiconductors and petrochemical goods, have been growing at a slower rate as the global markets remain volatile.

In a KDI survey of 19 economists, the outlook for the full-year GDP is 2.6 percent, while next year’s GDP growth is seen at 2.5 percent. The same survey in July generated a consensus forecast of 2.8 percent for both this year and next year.

The Finance Ministry said in a statement that it hopes to support the strengthening of the economy by actively spending to promote innovative growth and job creation.

Based on recent tax collections, the government is in a better position to achieve its goals.

In a report released Tuesday, the tax taken in the first 10 months of this year amounted to 263.4 trillion won, which is 26.5 trillion won, or 11 percent, more than the same period a year ago. As of October, the government has already achieved 98.2 percent of its annual goal.

Much of the growth was the result of a larger corporate tax take. The government collected 68 trillion won from companies in the first 10 months of the year, nearly 20 percent more than a year ago. It is already at 107.8 percent of its annual target.

In terms of income tax, the government collected 69.1 trillion won, 15 percent more than last year at the same time. It is already at 94.8 percent of its annual target. Value-added taxes grew 3 percent year on year to 68 trillion won, or 2.2 trillion won more than a year ago.

The government announced that it has spent 4 trillion won of the excess funds taxes to pay down the national debt.

The new Finance Minister in his inauguration speech on Tuesday stressed that it is time to show the results of the government policies.

“We have to break away from policy debates bound in a frame,” Hong said. “We have to end policies that are form without substance.”

He said, in order to achieve this goal, he will be meeting with people on the ground, from small business owners to large corporations, so that compromises can be reached with economic participants.

“Through discussion, negotiation and compromise on issues, we can resolve the differences with a social ‘big deal,’” Hong said. “I will not hesitate in making bold decisions and acting upon them if needed.

“I will come up with specific measures on major projects with the determination of finishing up by the first half of next year.”