Is 50 million won a year below minimum wage?

Is 50 million won a year below minimum wage? 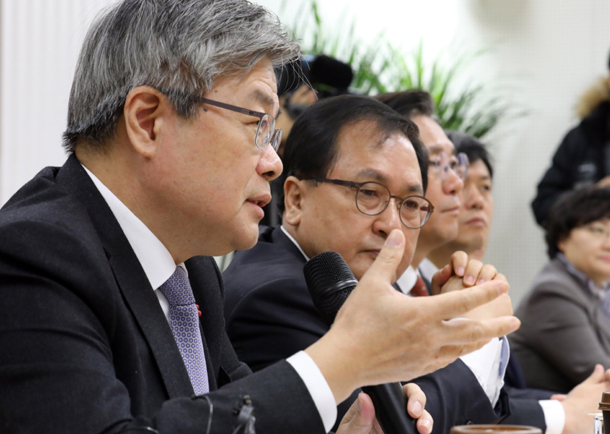 Minister of Employment and Labor Lee Jae-kap speaks at the ninth meeting of the Presidential Committee on the Fourth Industrial Revolution held on Monday at the KT Gwanghwamun Building in central Seoul. [NEWS1]

A government move to include resting hours in wage calculations could see jobs paying as much as 50 million won ($44,000) no longer considered as legally over the minimum wage threshold.

The Ministry of Employment and Labor, however, recently ordered the Hyundai Motor Group affiliate to make changes to its wage policy as it has failed to pay this year’s minimum wage of 7,530 won.

The hourly minimum wage, calculated by dividing wage by working hours, is intended to ensure that workers are paid above a certain amount. The government’s recent decision reflects wages and working hours that are different in practice from how they appear on paper.

When taking into account the 200,000 won worth of coupons given by the employer, the salary of a new employee amounts to 50 million won. Dividing a new Hyundai Mobis’ employee’s monthly pay of 4.17 million won, derived from the 50 million won salary, by the 174 work hours in a month results in an hourly wage of 24,000 won, more than three-times the minimum wage.

The government, however, only counts base salary and fixed regular payments in its calculations. The bonus pay that amounts to 26.8 percent of the entire salary is left out as it is given every other month and is therefore not a monthly wage.

Resting hours are based on resting allowance, extra pay given to workers for resting periods in a week, usually one or two days of a weekend, as a form of compensation for fully working the legally mandated work hours. The government includes Hyundai Mobis’ 69 monthly resting hours in its wage calculation, resulting in a total of 243 working hours a month.

With this calculation, new employees at Hyundai Mobis only earn 7,270 won per hour, short of the minimum wage.

The amendment, which was first announced in August, is currently under review by the Ministry of Government Legislation. The change will likely be passed early next year.

According to the minimum wage law, if wages amount to less than the minimum wage, the employer faces criminal punishment of up to three years of detention or a fine of up to 20 million won.

The Labor Ministry’s interpretation, however, doesn’t align with decisions made by the Supreme Court. The court has consistently ruled that resting hours do not need to be considered when calculating the minimum wage and that actual working hours should be the standard.

For example, working 40 hours a week results in 174 work hours a month. But when an extra eight resting hours a week are added, the total number of work hours amounts to an average 209 hours.

A monthly wage of 1.5 million won would follow the standard of the court as it equates to 8,620 won per hour for 174 working hours, but would be illegal under the eyes of the Labor Ministry as it would be paying 7,177 won for the total 209 hours.

The situation is more complicated for Hyundai Mobis, as businesses in the auto-parts industry agreed to 16 hours of resting hours per week in negotiations with the Korean Metal Workers’ Union. This would amount to a total of 243 working hours. A monthly wage of 1.5 million won would only amount to an hourly wage of 6,173 won, under the Labor Ministry’s calculations.

The Korea Employers Federation (KEF) and the Federation of Korean Industries (FKI), two major business lobbying groups, have expressed opposition to the amendment, arguing that it will pressure small and medium-sized businesses.

In a review opinion submitted to the Ministry of Government Legislation on Nov. 16, the KEF stated that, even when the same amount of labor is provided, the minimum wage payment could change as much as 40 percent based on the number of resting days negotiated.

The recent move by the government has also raised questions on legal certainty.

The Korea Economic Research Institute (KERI), a research institute under the FKI, recently released a report on the minimum wage hike and the effect of including the resting hours in its calculation.