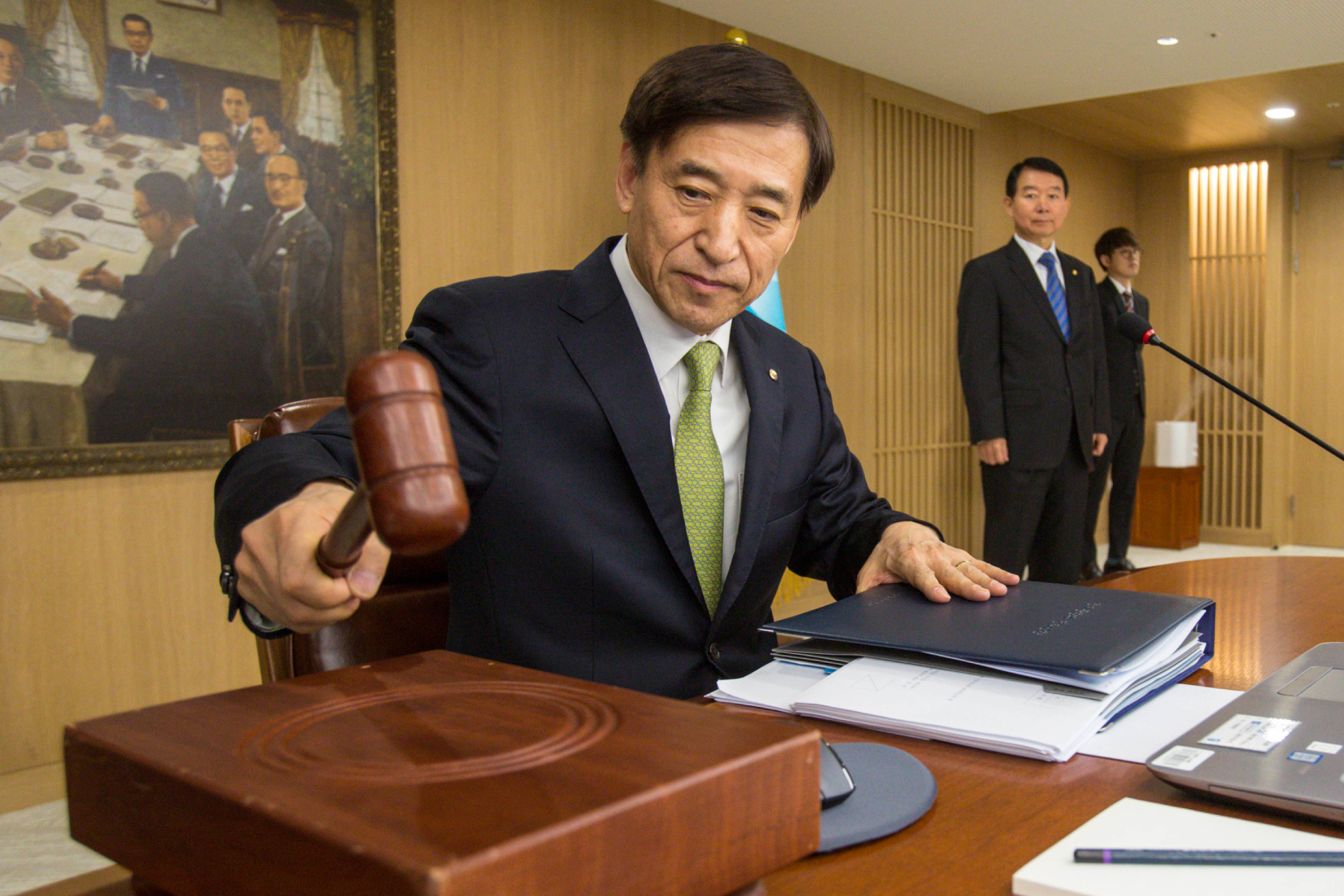 Governor Lee Ju-yeol of the Bank of Korea strikes a gavel during a monetary policy meeting on Nov. 30 that raised the benchmark interest rate. [YONHAP]

Two weeks after Korea’s central bank raised interest rates for the first time in a year, the hike is rippling through the economy.

With the U.S. Federal Reserve on track to gradually raise rates through next year, Korea’s increase of its base rate to 1.75 percent on Nov. 30 has already pushed up borrowing costs, although the banks’ own interest rates on deposits tend to edge up more slowly.

Interest rates for unsecured loans hovered above the 5 percent mark at some major banks.

The average interest rate for KEB Hana Bank’s unsecured loans stood at 5.02 percent in October, the latest data available according from the Korea Federation of Banks. That rate was the highest since September 2014 before Hana Bank merged with Korea Exchange Bank.

Citibank Korea charged an even higher interest rate of 6.06 percent in October.

“The interest rate will go even higher in the record for November, the month that the Bank of Korea (BOK) actually raised the rate and will continue to see upticks down the road,” said a source from Shinhan Bank.

Currently the rates are between 3 and 4 percent at the big four banks ? KB Kookmin, Shinhan, Woori and KEB Hana.

Analysts say that the banking sector will benefit from higher rates with widening interest margins. But brokerages could be negatively affected.

A rate hike is typically a boon for banks due to the rise in the net interest margin - the difference between what is paid to depositors and what is charged for different loans.

“The latest hike will help boost the banks’ net interest margins,” said Kim In, an analyst at Eugene Investment & Securities. “The quarter basis point increase will lead to a 3 basis point rise in the net interest margins in the first half of 2019, which can be converted into 376.5 billion won ($ 332.9 million) more in profit.”

But a one-time hike is not sufficient to lead to a run on banking shares, according to Jun.

“In order to restore the momentum, there should be expectations that the central bank will keep raising the rate through next year.”

Multinational financial institutions and local brokerages project that the BOK will hold the rate steady in 2019 because it expects global trade to shrink.

Securities companies, however, stand to lose because higher interest rates will translate into increasing costs for managing investment accounts.

“A rate hike typically takes place when the economy is doing well, but this time around, it was not the case,” said Lim Hee-yeon, an analyst at Shinhan Investment.

“The BOK was pressured to raise the rate, burdened by the widening rate gap with the United States and there are worries that the Korean economy is going into a downturn, which is not a good news for brokerages,” the analyst said.

“Life insurance companies suffer chronic financial losses from the interest rate gap between the past and present,” said Lim of Shinhan Investment, “The average interest rates of long-term financial products sold by the insurers stood at 4.4 percent, but the rate increase could reduce the damage.”