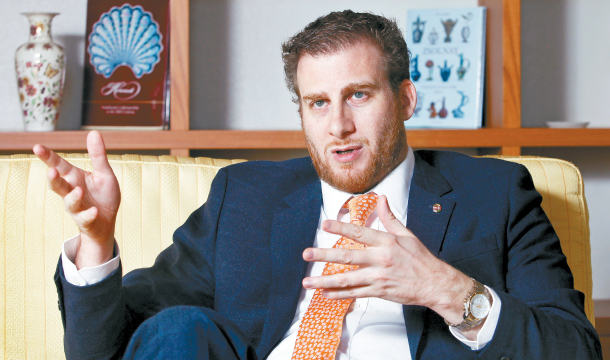 Mozes Csoma, the Hungarian ambassador to Korea and a scholar of Korean studies, talks about a rare photograph of master Korean dancer Kim Baek-bong, at the official residence of Hungary in central Seoul. [PARK SANG-MOON]

Two years ago, when Mozes Csoma, a scholar of Korean studies who is now serving as the Hungarian ambassador to Korea, heard that Korean traditional dance master Kim Baek-bong had visited Budapest in 1949 to participate in the second World Festival of Youth and Students as a Korean traditional dancer, he was immediately interested in her story and began to research the event that took part in his country nearly 70 years ago. Back then, Budapest was still recuperating from the second World War and was, in Csoma’s words, a “destroyed city.”

But Kim remembered Budapest as “a beautiful city” that provided her with an unforgettable experience on a cruise around Margaret Island on the Danube River that runs through Hungary’s capital. Csoma realized that the event could have been the very first time that Hungarians were exposed to traditional Korean dance.

He tried to find photographs of the festival featuring Kim and combed through the archives of the Hungarian national news agency, but failed to find anything. He then tried Fortepan, an online collection of amateur photographs, and among hundreds of black and white photographs of the festival, Csoma found two that may include Kim, who is now 92. She is known as the creator behind Hwagwanmu, a floral coronet dance and Buchaechum, a fan dance. She used to be the best pupil of the late Choi Seung-hee (1911-1967), the greatest Korean dancer of her time who decided to live in North Korea during the Korean War (1950-53).

“The two photographs had a group of women wearing hanbok [traditional Korean clothes] and one of them looked like Kim to me,” Csoma recalled. For verification, Csoma sent the photographs to Kim’s daughter Ahn Byung-ju, who is a professor of Korean dance at Kyung Hee University. Ahn confirmed that the woman in one of the photographs was her mother.

“I was so excited to find this photograph,” said Csoma. “This photograph is symbolic in that it could be the very first photograph that shows Hungarians’ interest in Korea and its culture.”

Next year marks the 30th anniversary of the formation of diplomatic relations between the two countries, and Csoma thought that it could herald the beginning of the year-long celebration if he framed the “very rare photograph” and presented it to Kim.

The ambassador went right into action and held an event at a reception night for Korean dancers held last Friday at the Arko Arts Center in central Seoul.

“Next year also marks the 70th year since Kim visited Budapest, which means that it’s been nearly 70 years since [Hungary was first introduced to] Korean culture and dance.”

Prior to the Friday’s event, the Korea JoongAng Daily paid a visit to the official residence of the Hungarian ambassador in Hannam-dong, central Seoul, to hear more about the unique photograph. The following are edited excerpts from the interview. 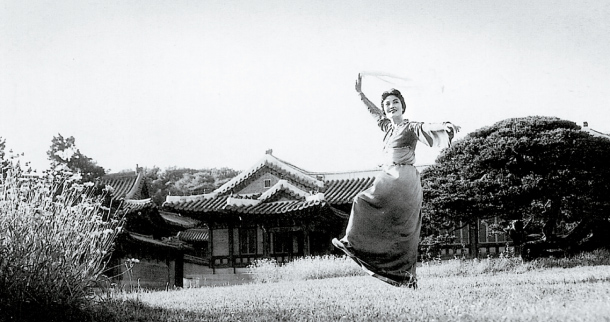 A photograph of veteran Korean dancer Kim Baek-bong, who is now 92. She is known as the creator of Hwagwanmu, a floral coronet dance and Buchaechum, a fan dance. [YONHAP]

Q. The photograph you found is in such good condition. How did you discover it?

A. Yes. It’s in very good condition. First of all, prior to my service as the Hungarian ambassador to Korea, I was a professor of Korean studies at the National University of Budapest. The field of my research was the history of the Korean Peninsula; especially I’m really interested in the historical relations between Korea and Hungary.

Of course, Hungary and Korea are located very far from each other geographically, but when I researched the history of the two countries, I found obvious similarities between them. Both regions are located among big powers, and historically, both regions suffered from foreign aggression over the last 1,000 years.

I’ve been especially intrigued to find out how Korean intellectuals such as scholars, writers, poets and artists, chose between the two parts of the Korean Peninsula after Japanese occupation.

Many intellectuals, including the Korean dance master Choi, decided, in 1946, to live in the northern part of the Korean Peninsula.

This interest led me to meet up with Kim about two years ago, while I was in Seoul as a researcher. She told me her story about her trip to Budapest to perform as a dancer at the second World Festival of Youth and Students, which was basically a propaganda event of communist countries.

The festival was held every two years in the capitals of the communist countries at the time, so Budapest held the event in 1949, and the festival was also held in 1989 in Pyongyang.

As far as I know, it was North Korea’s biggest festival ever, and that is when South Korean Lim Su-kyung, a former member of the National Assembly, got in trouble for visiting Pyongyang as a college student. So I researched deeper and eventually found this rare photograph of Kim in Budapest. I wanted to present it to her because next year marks 70 years since her visit.

After thorough research, you only managed to find one black and white photograph of Kim during the festival in Budapest. Do you know if Kim has any of her own?

When I interviewed her two years ago, I realized that she did not possess any items to remember her performance in Budapest. She left to North Korea with her teacher Choi, but during the second year of the Korean War, in 1951, she told me that she fled to South Korea, and obviously, was unable to bring many of her things with her. 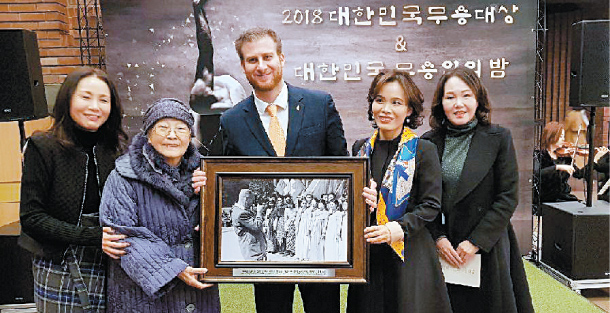 Hungarian Ambassador to Korea Mozes Csoma, center, presents a rare photo he found of Kim Baek-bong, second from left, that was taken after a performance in Budapest in 1949, on Friday at the Arko Arts Center in central Seoul. [MOZES CSOMA, SCREEN CAPTURE]

Do you believe that the first encounter Hungarians had with Korean dance was through Kim and her colleagues’ performances during the festival in 1949?

That’s right. I was curious when Hungarians first learned about Korean culture, especially dance. When I researched, I found out that it was definitely that event that central Europeans saw Korean dance for the first time. Of course, dance master Choi had performed in western Europe many times, so people there knew about Korean dance, but as far as I know, it was 1949 for central Europeans. I combed through old newspapers and that is the first time that Korean dance was ever mentioned in Hungarian press.

Did you research other intellectuals who went to North Korea, but have connection to Hungary?

Yes. I was actually fascinated by their stories. The intellectuals include some Korean writers like Lee Tae-jun (1904-?). He wrote popular short stories, and he had visited Budapest before he was purged in North Korea in 1956 after choosing to live there in 1946. There’s also Han Sorya (1900-76), who was very popular in North Korea until early 1960s. One of his novels, titled “Taedonggang,” (1955) has also been published in Hungarian. The works of poet Lim Hwa (1908-53) are also available in Hungarian, although he never visited the country. Many of these intellectuals were purged in North Korea, and when they died, North Korea also discarded their works, taking them off the shelves.

Since they were destroyed in North Korea, the works don’t exist in South Korea either. But many of their works, to my surprise, are in Hungarian. This evidence is significant, because we can trace back to the cultural exchanges of the two countries. But there’s something more important. It shows that there’s no division when it comes to the cultural heritage of Korea. There’s no North Korea or South Korea. There’s only one Korea that shares these great heritages.

Left: The photograph that Csoma found of Kim. Right: The cover of Csoma’s book “From North Korea to Budapest.” [MOZES CSOMA, SCREEN CAPTURE]

As a scholar of Korean studies and a newly appointed ambassador to Korea, what are your goals here?

It is my pleasure to start this service. Over the last 20 years, I learned a lot about Korean culture and Korean history. And as I said earlier, Hungary and Korea share similarities, and not just with the South, but both parts of the peninsula. Because I was able to gain a great deal of knowledge about Korea over the past 20 years, I would like to use that knowledge in real life as an ambassador to Korea.

One of the biggest events coming up is the 30th anniversary of diplomatic relations between Hungary and Korea next year.

We plan to dedicate the whole year to various cultural exchanges. Moreover, there’s no Hungarian Embassy in North Korea, so the ambassador to South Korea is responsible for North Korea as well. As a scholar of Korean studies, I also want to contribute in bringing the two Koreas closer.

This black and white photograph of Kim also carries that kind of message. Kim came to Budapest 70 years ago to represent North Korea. She is now celebrated as one of the masters of Korean dance here in the South.