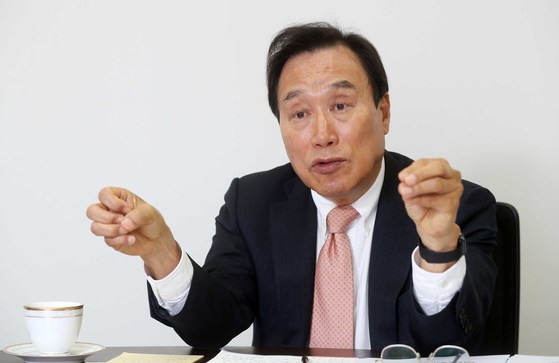 A devil’s advocate is a person who posits an opposing opinion when everyone else agrees. It originates from the canonization process in the Catholic Church: in order to verify the candidate’s character, a devil’s advocate keeps the discussion alive by arguing against the chosen candidate.

Kim Kwang-doo, vice chairman of the National Economic Advisory Committee, was the Moon administration’s devil’s advocate in, but is now returning to school. He said he would like to return to Sogang University, engage in discussions with professors and students, and write one more book before he gets older. He added that investment in people was the key method to overcome the polarization of the Korean economy, and to enhance sustainable welfare and corporate competitiveness. “I would write a book on modern capitalism and human capital,” he said.

Kim was the opposition within the government; he has been making bitter remarks since April. Raising the minimum wage will not revive the economy, and industrial restructuring and labor reforms should be pursued simultaneously, he argued. He also claimed that jobs are needed to save jobs, and that investment in infrastructure was needed to nurture new industries.

“The fields are ignoring the president’s order for deregulation. Working-level officials are indifferent as they are being punished for deep-rooted evil practices,” he said. On the Gangnam area in Seoul, he asked, “It is a great place. Why wouldn’t people move to the area?” On fiscal input, he said that it was like getting addicted to drugs. He warned that the world was running toward the future, but that Korea lacks dynamic energy to do so as deregulation and industrial restructuring are slow.

But the devil’s advocate’s voice was ignored. At the beginning of the year, the administration could drive President Moon Jae-in’s economic agenda as his approval rating was over 70 percent. Despite their side effects, his economic experiments — the minimum wage’s increase and work hours’ reduction — were pushed. Kim warned, “Experiences of the 1997 foreign currency crisis and 2008 global financial crisis taught us that Korea had a limited view and did not know how the world worked. Korea was hit hard when we thought it was safe as we had strong fundamentals.”

Kim designed the core vision of Moon’s economic policy involving drastic increases in the minimum wage to a livable level and the work week’s reduction. The precondition was to pursue restructuring at the same time in order to improve labor productivity, create job rotation capability, help industries to have high-added value and boost their workers’ wages. He played devil’s advocate, but nobody was listening.

With his departure, I am that worried that untested policies will be even more reckless than before.